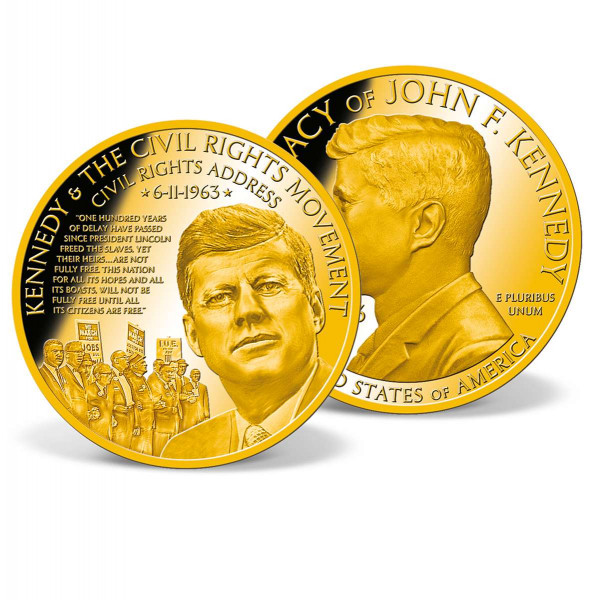 Includes a free preview of future issues in the collection The Legacy of John F. Kennedy. For more information, please refer to the Satisfaction Guarantee tab below. If you do not wish to preview future issues in the collection, you may purchase the single item using the 'Individual Item Only' tab at right.
Price $129.95 * $19.95
Total: $19.95
You save $110.00
Total: $129.95
Tweet
Share
Description Satisfaction Guarantee
Description
"Today, we are commited to a worldwide struggle to promote and protect the rights of all who... more
Close menu
Kennedy and the Civil Rights Movement Commemorative Coin

"Today, we are commited to a worldwide struggle to promote and protect the rights of all who wish to be free." John F. Kennedy

On June 6, 1963, President Kennedy presented anationally televised speech in response to the U.S. National Guard being sent to protect Vivian Malone and James Hood, two African-American students enrolling at the University of Alabama. In this nowhistoric address, he urged the nation to take action toward guaranteeing equal treatment of every American regardless of race. Soon after, Kennedy proposed that Congress consider civil rights legislation that would address voting rights, public accommodations, school desegregation, nondiscrimination in federally assisted programs, and more. Kennedy's proposal culminated in the Civil Rights Act of1964. Signed into law by President Lyndon Johnson on July 2, 1964 - less than a year after Kennedy's assassination - the act outlawed all discriminatory employment practices based on sex or race andended segregation in public places such as swimming pools, libraries, and public schools.

Specially minted to mark the 50th Anniversary of JFK's historic Civil Rights Address, this AMERICANMINT EXCLUSIVE coin features a highly detailed engraving of President Kenndy and an excerpt from his speech on the obverse. Minted to the highest quality "Proof" standard and layered in 24k gold, it is an incredible 2.75" in diameter. A stirring tribute to one of the most important Presidential speeches in the modern era, this colossal commemorative coin is limited to only 9,999 complete collections worldwide and comes encased in a protective capsule to preserve it for future generations.