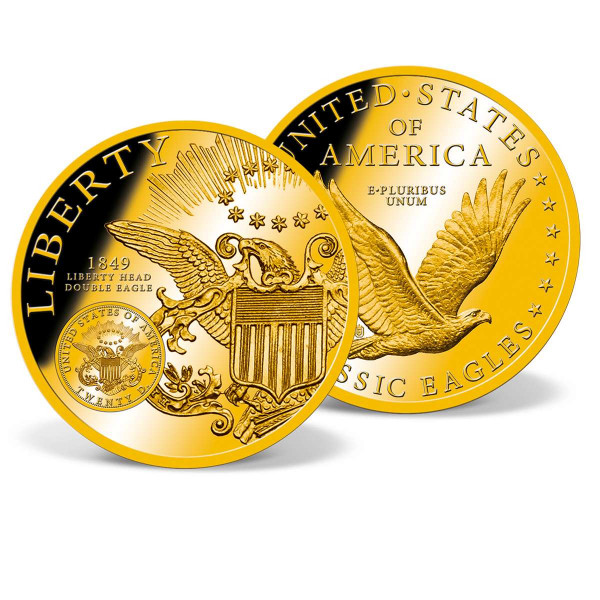 Includes a free preview of future issues in the collection Class.Eagles US Coins Jumbo. For more information, please refer to the Satisfaction Guarantee tab below. If you do not wish to preview future issues in the collection, you may purchase the single item using the 'Individual Item Only' tab at right.
Price $179.95 * $19.95
Total: $19.95
You save $160.00
Total: $179.95
Tweet
Share
Description Satisfaction Guarantee
Description
Majestic and noble, the Bald Eagle has been the official national bird for the United States of... more
Close menu
Jumbo Liberty Head Double Eagle Commemorative Coin

Appearing frequently on flags and emblems used by the government, the Bald Eagle has also been featured on many historic U.S. coins. One of the most notable coins to have an eagle on it was the 1849 Gold Double Eagle. The first gold double eagle ever minted, it was designed by Chief Engraver James B. Longacre -- its heraldic eagle on the reverse perfectly symbolized the strength of the young country.

Available exclusively from American Mint, this magnificent coin features James Longacre's "Eagle and Shield" design, along with a detailed reproduction of the 1849 Liberty Head DoubleEagle on the obverse. An incredible 4" in diameter and luxuriously layered in 24k gold, it is a fitting tribute to our national bird and its rich history of appearing on classic U.S. coinage. This highly detailed coin is minted to the highest quality "Proof" standard and comes in a protective capsule to preserve it for generations to come.