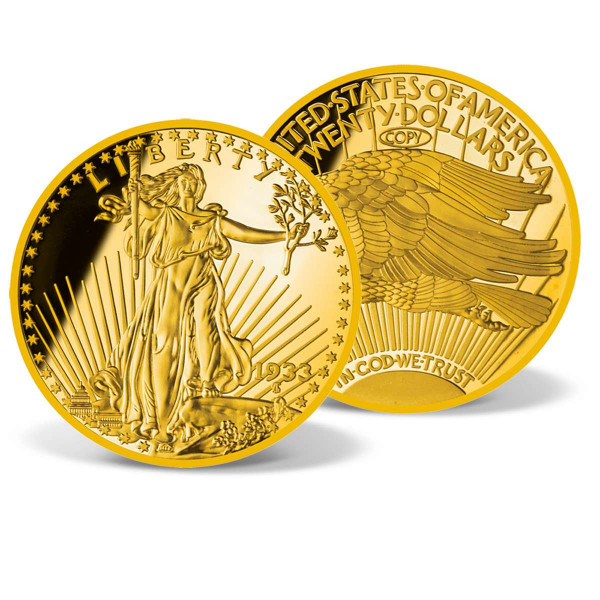 The $20 Gold Double Eagle is one of the most intriguing coins in American numismatic history. Originally minted in 1849 and based on the Liberty Head design by James B. Longacre, the piece experienced multiple revisions over the years. In 1904, President Theodore Roosevelt commissioned the noted American sculptor Augustus Saint-Gaudens to redesign the Double Eagle. Issued in 1907, the Saint-Gaudens version is a high-relief coin that many experts consider to be a masterpiece. However, the U.S. Mint insisted on producing a low-relief variation to make it more "functional."

The 1933 20 Dollar Gold Coin Signified the End of a "Golden Era" in Minting In 1933, with America caught in the grip of the Great Depression, President Franklin Roosevelt signed an Executive Orderdeclaring private ownership of gold illegal. The government confiscated all Gold Double Eagles minted in 1933 and melted them down into plain gold bars, but a small handful of these coins escaped this fate.

Two were sent to the Smithsonian, while some were secreted away by a Mint employee. One by one, federal agents were able to locate - and confiscate - most of the coins. However, oneresurfaced in 1944 as part of an Egyptian king's coin collection, and political considerations prevented the Secret Service from claiming it.

After the king's death, the coin ended up in America's possession where it was stored at the World Trade Center, only to be moved just days before the terrorist attacks of September 11, 2001. In 2002, it sold at auction for an astonishing $7.59 million, making it the most expensive gold coin in history.

Add a Beautiful 1933 Gold Double Eagle Replica to Your Coin Collection Although you probably won't be able to own an original version of this highly coveted collectible, the American Mint 1933 Gold Double Eagle Replica Coin can serve as an excellent substitute. Ours is a faithful reproduction of the last variation of the original Saint-Gaudens design, including the highly detailed "Liberty" obverse and "Gold Eagle" reverse. We've luxuriously layered our piece in gleaming 24k gold and minted it to the highest standards for quality and craftsmanship.

Purchase Your 1933 20 Dollar Gold Coin Replica at a Fantastic Online Price We're offering our 1933 20 dollar gold coin replica for sale at a significantly discounted online price that can fit any budget. We'll also include free shipping and handling if your order totals at least $150, as well as the opportunity to pay in interest-free monthly installments if you spend more than $100.

Order your 1933 Gold Double Eagle Replica online from American Mint today. Feel free to call us at 1-877-807-MINT Monday through Friday from 8 a.m. to 8 p.m. EST to speak to a live representative if you have questions or need assistance.