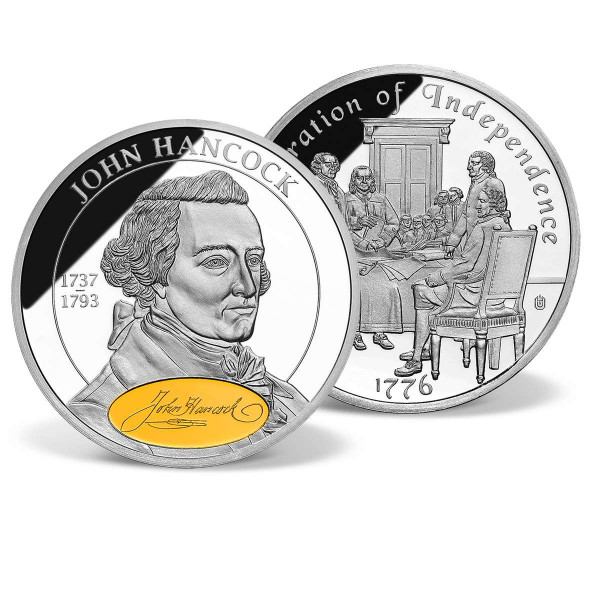 Includes a free preview of future issues in the collection Declaration of Independence. For more information, please refer to the Satisfaction Guarantee tab below. If you do not wish to preview future issues in the collection, you may purchase the single item using the 'Individual Item Only' tab at right.
Price $79.95 * $19.95
Total: $19.95
You save $60.00
Total: $79.95
Tweet
Share
Description Satisfaction Guarantee
Description
July 4, 1776 - It had been over a year since the "shot heard around the world" was fired at... more
Close menu
John Hancock Commemorative Gold-Accented Coin

July 4, 1776 - It had been over a year since the "shot heard around the world" was fired at Lexington and Concord, lighting the fuse of revolution for the 13 British colonies. In Philadelphia, theSecond Continental Congress - presided over by John Hancock - gathered to ratify a document that would change history.

The Declaration of Independence became this country's most important document and put forth the ideals of a free society. With bold strokes of a quill pen, John Hancock became the first man to sign the famous document that proclaimed the United States of America would forever be "Of the people, by the people, and for the people."

One of the wealthiest merchants in Boston, John Hancock used his vast fortune to further the cause of the Patriots' fight for independence during the American Revolution. As protégé to Samuel Adams, Hancock began a career as a statesman, eventually serving as the 1st and 3rd Governor of Massachusetts and the president of the Second Continental Congress. Today, John Hancock is remembered as the first person to sign the Declaration of Independence, and his name has become synonymous with signature.

American MintOffers a Beautiful Gold-Accented John Hancock Coin for Sale Meticulously designed, this dazzling tribute to John Hancock - the first man to sign the Declaration of Independence - features ahighly detailed engraving of this Founding Father on the obverse. Hancock's famous signature is expertly inscribed in a decorative oval luxuriously accented in 24k gold. The coin's reverse reads "Declaration of Independence" and depicts Hancock with the other men who gathered to place their signatures on the document that set the stage for our liberation from Great Britain.

The John Hancock Declaration of Independence Coin Exemplifies Our Commitment to Quality This coin is minted to the highest quality "Proof" standard and comes in a protective capsule to preserve it forgenerations to come. You'll also receive a Certificate of Authenticity that certifies its size and materials and contains a host of interesting facts about the item. There are only 9,999 complete collections minted, so be sure to order yours now while the supply lasts!

Get a Great Price on Your John Hancock Coin Our low price on the John Hancock Commemorative Gold-AccentedCoin ensures you'll get exceptional value for your money. We'll also include free shipping for all orders of at least $150, as well as the ability to make interest-free monthly installments if you spend more than $100.

Purchase your coin today, and feel free to call us at 1-877-807-MINT if you have questions or need more information.