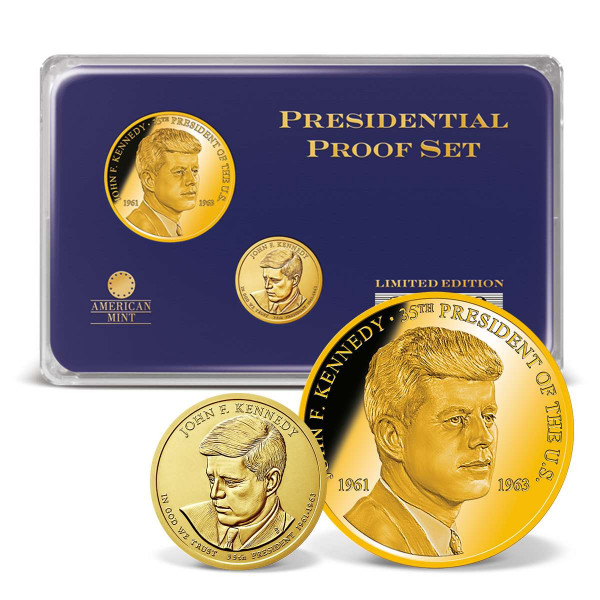 Includes a free preview of future issues in the collection Presidential Coin Sets. For more information, please refer to the Satisfaction Guarantee tab below. If you do not wish to preview future issues in the collection, you may purchase the single item using the 'Individual Item Only' tab at right.
Price $79.95 * $19.95
Total: $19.95
You save $60.00
Total: $79.95
Tweet
Share
Description Satisfaction Guarantee
Description
John F. Kennedy served as our 35th president  and left an indelible mark on our nation. Born... more
Close menu
John F. Kennedy Presidential Commemorative Coin Set

John F. Kennedy served as our 35th president  and left an indelible mark on our nation. Born into a wealthy Massachusetts family in 1917, JFK served with distinction as the commander of an American PT boat during World War II. After his military service, he pursued a career in politics that culminated in his election as president in 1960. Tragically, an assassin's bullet struck down the youthful, vigorous president in 1963 leaving many to wonder what might have been.

In 2005, the U.S. Mint introduced a series of one-dollar coins honoring our nation's Presidents, to be released inthe order in which they served. In 2012, budgetary restraints forced the Mint to limit production of future Presidential Dollars, making a limited number of new Presidential Dollars available only tocollectors who are willing to pay a premium above face value.

The Presidential Dollar honoring John F. Kennedy made its highly anticipated debut in June 2015. As expected, the public response was very high, proving that even though its been over 50 years since his death, JFK remains one of the most popular and beloved Presidents of our time.

A Stunning Limited-Edition Coin Set You'll Be Thrilled to Own The John F. Kennedy Presidential Commemorative Coin Set is strictly limited to only 20,000 sets worldwide and comes packaged in our exclusive KeepSafe(TM) archival case to protect and display your coin set for generations to come.We know you'll be proud to show it off to your family, friends, and fellow collectors. You'll also receive a Certificate of Authenticity that certifies each piece's size and materials and includes a host of interesting facts about them.

Purchase Your JFK Commemorative Coin Set at an Incredibly Low Price Here at American Mint, we strive to make collecting affordable for new and experienced collectors alike. Order your gleaming John F. Kennedy commemorative coin set online today at a significantly discounted price! If you're a big fan of presidential commemorative coins, you can add several of our other extraordinary pieces to your order  we'll include free shipping and handling if you spend at least $150. You can also pay in interest-free installments if your order exceeds $100.

Make Your Purchase Right Now! Ordering the JFK commemorative coin set or anything else from American Mint is fast, easy, and secure. If you have questions or need help, feel free to give us a call Monday through Friday from 8 a.m. to 8 p.m. EST at1-877-807 MINT. While you're here, don't forget to check out our entire selection of coins and other fun collectibles like full-color baseballs, die-cast model cars, and fine jewelry pieces.