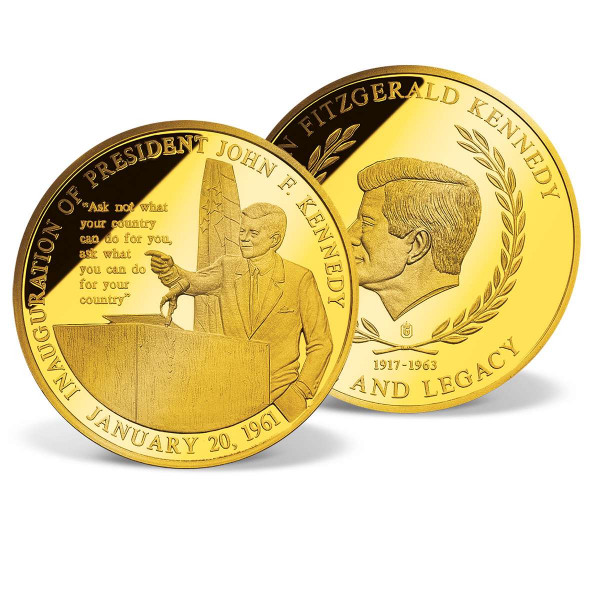 Includes a free preview of future issues in the collection Life of John F. Kennedy. For more information, please refer to the Satisfaction Guarantee tab below. If you do not wish to preview future issues in the collection, you may purchase the single item using the 'Individual Item Only' tab at right.
Price $79.95 * $19.95
Total: $19.95
You save $60.00
Total: $79.95
Tweet
Share
Description Satisfaction Guarantee
Description
"Ask not what your country can do for you, ask what you can do for your country." With this... more
Close menu
John F. Kennedy Inaugural Speech Commemorative Coin

"Ask not what your country can do for you, ask what you can do for your country." With this powerful appeal, John F. Kennedy called Americans to action during his inauguration as President of the United States on January 20,1961. Today, more than four decades later, that speech remains one of the most quoted and remembered inaugural addresses of all time.

When John F. Kennedy was sworn in as the 35th President of the United States in 1961, America fell in love with his youthful charm, good looks, and quick wit. But it was his strong will and political savvy that led an entire nation through trying times, such as the Cuban Missile Crisis, and onto its greatest achievement of landing a man on the moon. His brilliant political career was cut short by an assassin's bullet on Friday, November 22, 1963.

Today, 50 years after that tragic event, JFK is remembered as one of the most beloved and revered men ever to hold the Office of President of the United States.

Gold-Layered Kennedy Inauguration Coin Honors the JFK Legacy American Mint is proud to offer this gleaming John F. Kennedy 1961 inauguration coin. Luxuriously layered in 24k gold,this proof-quality piece includes a depiction of JFK as he delivers his momentous address to the nation, along with his famous quote, on the obverse. The reverse, entitled "Life and Legacy of JFK," features a distinguished image of Kennedy in profile.

Whether you're an experienced collector of presidential commemorative coins or just getting started, this coin will quickly become a highlight of your collection.

The JFK Inauguration Coin: Excellent Quality and Value for Your Money At American Mint, we want to be your reliable partner for all collecting. We've crafted this exquisite piece with the utmost skill and careful attention to detail. Plus, we're offering it for sale at an incredibly low online price. Add other items to your order and get free shipping, which applies to all purchases of at least $150. Spend more than $100, and you can pay in convenient, interest-free monthly installments. You'll also receive a Certificate of Authenticity that certifies the coin's size and materials.

Be sure to check out our complete selection of presidential coins and other outstanding collectibles.