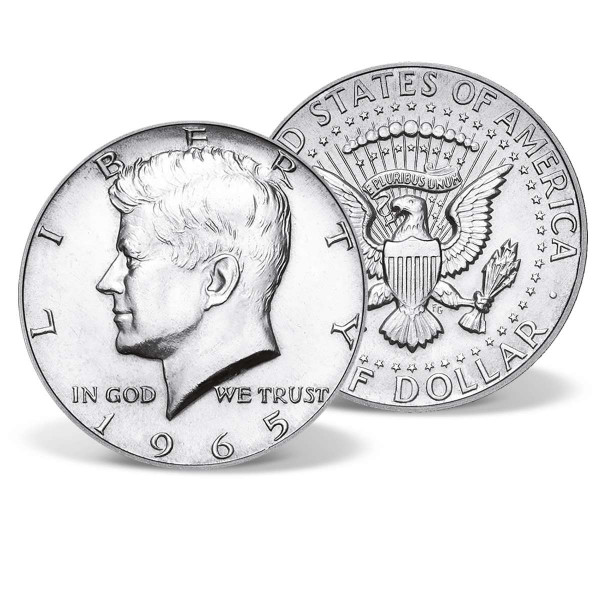 Here is your opportunity to honor one of America's most beloved presidents. John F. Kennedy was a war hero, a historian, a statesman, and the courageous president who stood down the Russians duringthe Cuban Missile Crisis in October 1962, demonstrating the futility of nuclear blackmail. Assassinated on November 22, 1963, he was both the youngest man elected president and the youngest to die.

Now you can own a very special edition of the coin minted to honor this American hero for all he accomplished - the John F. Kennedy Half-Dollar in 400/1,000 silver. Whether you are a first-time purchaser or have been collecting commemorative coins and medallions for years, you'll be proud to place this coin at the very center of your collection.

Presenting the John F. Kennedy Silver Half Dollar Coin Because it honors the life and presidential contributions of one of America's most popular presidents, the John F. Kennedy half dollar immediately became one of the most sought-after coins. In fact, it is still being minted today.

The JFK half dollar coin is made out of silver and copper. The coin features a likeness, which was designed by Gilroy Roberts and approved by Jacqueline Bouvier Kennedy on the face. On the reverse, you'll find a heraldic eagle. This eagle, which was sculpted by Frank Gasparro, was inspired by the design of the Great Seal of the United States.

American Mint: Your Reliable Partner in Collecting At American Mint, we believe that every collector should have the information and certification needed to feel confident that they are adding an authentic coin to their collection. When you order your John F. Kennedy half dollar coin from American Mint, we'll include a Certificate of Authenticity that highlights important details such as your coin's materials and size.

We'll also provide you with a money-back guarantee. Within 20 days after you receive your coin, you are welcome to return it for any reason at all. You'll be able to request a new coin, a credit to your account, or a full refund - we'll even cover the shipping and handling. You deserve to be completely satisfied withyour purchase, and we will do everything possible to ensure you are.

Add a Touch of U.S. History to Your Collection With the JFK Silver Half Dollar At American Mint, our JFK half dollar is reasonably priced. Any collector, regardless of their budget, will be able to add this coin, which holds a great deal of sentimental value, to their collection.

We frequently discount our authentic and replica collectibles on our site, so be sure to check back frequently. You'll also want to check out our complete line of presidential coins honoring the many presidents whoshaped American politics and history.