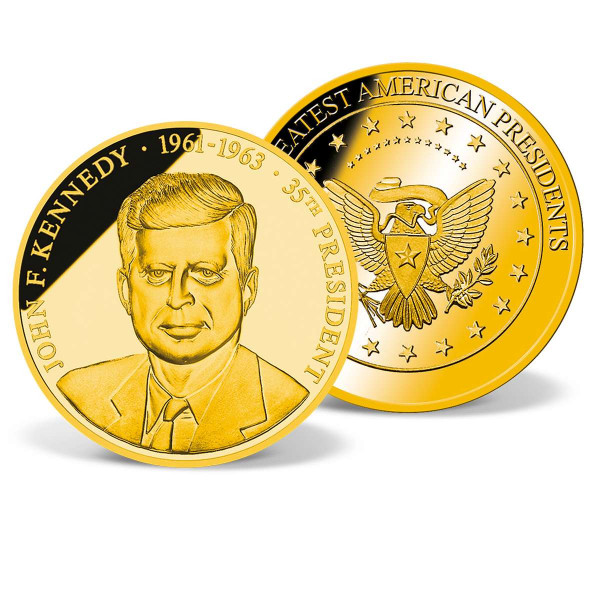 Includes a free preview of future issues in the collection The greatest U.S.Presidents. For more information, please refer to the Satisfaction Guarantee tab below. If you do not wish to preview future issues in the collection, you may purchase the single item using the 'Individual Item Only' tab at right.
Price $129.95 * $29.95
Total: $29.95
You save $100.00
Total: $129.95
Tweet
Share
Description Satisfaction Guarantee
Description
Born in 1917, John F. Kennedy seemed destined for greatness. The 2nd son of a prominent family,... more
Close menu
John F. Kennedy Commemorative Gold Coin

Born in 1917, John F. Kennedy seemed destined for greatness. The 2nd son of a prominent family, JFK became a war hero who captivated the nation and went on to become President. America fell in lovewith his youthful charm, good looks, and quick wit, but it was his strong will and political savvy that led an entire nation through trying times, such as the Cuban Missile Crisis, and onto its greatest achievement of landing a man on the moon. Kennedy also helped to lay the groundwork for what would become the Civil Rights Act of 1964, which ended segregation in many areas of public life and banned various forms of discrimination.

Kennedy's brilliant political career was cut short by an assassin's bullet on Friday, November 22, 1963, in Dallas, Texas. Today, JFK remains one of themost beloved and revered men ever to hold the office of President of the United States of America.

Our JFK Gold Coin Honors the Kennedy Presidential Legacy At American Mint, our beautiful John F. Kennedy commemorative gold coin is our way of paying tribute to one of the most beloved and revered figures in our nation's history. Minted in gleaming 14K solid gold, this piece bears a striking image of JFK during his presidential years on the obverse. The reverse bears the legend "Greatest American Presidents," and features an engraved portrait of a bald eagle, our nation'senduring symbol of freedom and independence.

Take Pride in Owning a Kennedy Gold Coin At American Mint, we want you to feel the sense of pride that comes with owning and displaying a piece as unique as the John F. Kennedy gold coin. Our in-house experts have the skill and experience to craft high-quality products that never fail to impress. Many of our pieces are American Mint exclusives you won't find anywhere else.

Save Money on Coins by Shopping at American Mint American Mint is the best place to shop if you're looking to reduce your coin and collectible costs. We're thrilled to offer the Kennedy gold coin for sale at a significantly discounted online price. Combine the piece with other items in our collection and get free shipping and handling, which applies to all orders greater than $150. Our interest-free monthly installment plan, which is available with all purchases of more than $100, gives you the flexibility to pay for your coinsover time.

Order Your John Kennedy Gold Coin Today! Buy the stunning John F. Kennedy commemorative gold coin easily and securely right here at our e-commerce site. If you havequestions or need assistance, give us a call at 1-877-807 MINT Monday through Friday from 8 a.m. to 8 p.m. EST. Be sure to browse our other presidential coins while you're here, as well.