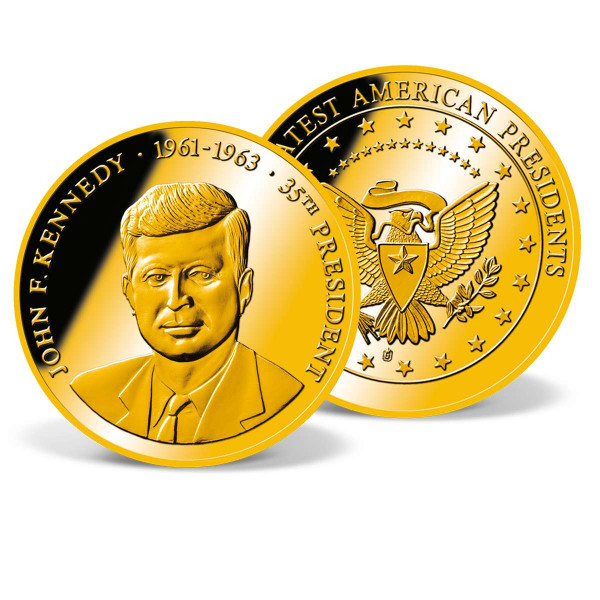 Includes a free preview of future issues in the collection Greatest American Presidents +. For more information, please refer to the Satisfaction Guarantee tab below. If you do not wish to preview future issues in the collection, you may purchase the single item using the 'Individual Item Only' tab at right.
Price $39.95 * $9.95
Total: $9.95
You save $30.00
Total: $39.95
Tweet
Share
Description Satisfaction Guarantee
Description
Despite protests that he was too young and inexperienced for the presidency, John F. Kennedy won... more
Close menu
John F. Kennedy Commemorative Coin

Despite protests that he was too young and inexperienced for the presidency, John F. Kennedy won the 1960 election in an unforgettable victory over Richard Nixon. It wasn't long before JFK was ableto leave an indelible mark on the office. When faced with a major confrontation between the U.S. and the Soviet Union over the presence of nuclear missiles in Cuba in 1962, Kennedy's unparalleled diplomacy earned him worldwide respect.

The hope and promise John F. Kennedy represented was shattered by the tragedy of November 22, 1963. On that day, an assassin's bullet struck down the president as he traveled in a motorcade through the streets of Dallas. We can only wonder what might have been if JFK was able to serve out his term in office.

Our 50th Anniversary JFK CoinHonors the Legacy of a Transformative President This is your opportunity to add the AMERICAN MINT EXCLUSIVE John F. Kennedy commemorative gold-layered coin to your own collection! Meticulously designed and layered in 24k gold, this exquisite coin features a highly detailed portrait of JFK on the obverse. The reverse bears the appropriate title of "Greatest American Presidents." Our JFKcoin will be a welcome addition to any collection.

Our John F. Kennedy Commemorative Gold Coin Offers Superior Quality Minted to the highest quality "Proof" standard, the JFK commemorative coin will exceed your expectations. Our expert team crafts each piece with the utmost care and remarkable attention to detail. It's part of our ongoing effort to provide superior coins andcoin sets that offer the thrill of ownership that our customers crave. We know you'll display it proudly in your home or office.

Our JFK coin may even become a valued family heirloom. It comes in a protective capsule to preserve it for future generations -- a true collector's item. Because we've limited the minting of the coin, you'll want to act quickly while the supply lasts.

You'll Love Our Affordable Online Pricing If you're tired of paying high prices for your commemorative coins, you'll appreciate partnering with American Mint. Our mission is to deliverhigh-quality coins and collectibles at a budget-friendly cost. We're offering the JFK commemorative coin for sale at a surprisingly low price. The opportunity for free shipping and interest-free monthly installments (if meeting eligibility requirements) can make purchasing coins easier and more convenient.

Order Your 50th Anniversary John F. Kennedy Coin Today Our streamlined ordering simplifies the process of purchasing our products online. If you need help, you can reach us by phone on weekdays at 1-877-807-MINT. And be sure to check out all our fantastic commemorative coins while as well.