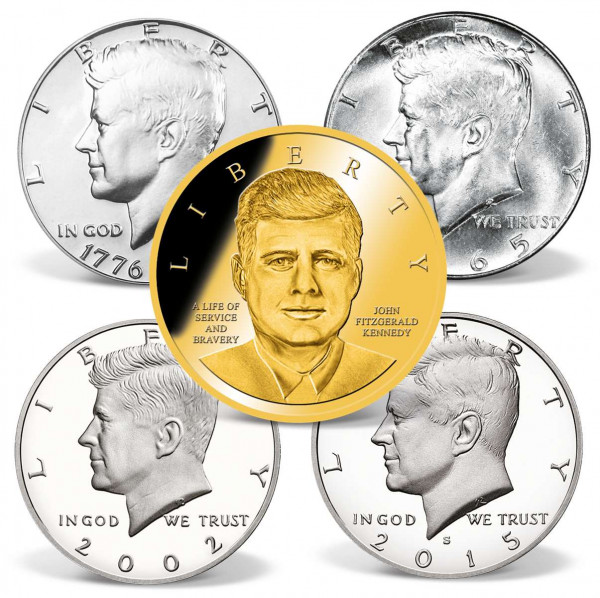 Total: $195.00
Tweet
Share
Description
Description
A decorated war hero, Pulitzer Prize winning author, humanitarian, and U.S. Senator, John F.... more
Close menu
JFK 50th Anniversary 5-Piece Set - 2015 Edition
A decorated war hero, Pulitzer Prize winning author, humanitarian, and U.S. Senator, John F. Kennedy brought a new, youthful spirit to the White House. As President, he led the fight for freedom and civil rights from Berlin to Vietnam to Cuba and here at home. He established the Peace Corps and supported America's space exploration, vowing to put a man on the moon. Tragically, his life was cut short after just three years in office, but his legacy endures to this day, making him one of America's most beloved presidents. When John F. Kennedy was assassinated in Dallas on November 22, 1963, the nation was overcome by an incredible sadness and tragic sense of loss. Congress acted very quickly to immortalize the popular late President on the half dollar. In January, 1964 - a mere two monthsafter JFK's tragic death - minting began on the Kennedy Half Dollar. They became very popular with a public that was still in mourning over the President's death. Today, more than 50 years later, JFKstill remains one of the most beloved Presidents of our time and the half dollar bearing his image is still one of the most collected coins in American history. The set contains 4 genuine KennedyHalf Dollars from important years of the historic coin's production: 1965 - 50-year-old coin from the second year of production 1976 - Bicentennial Edition and the only half dollar to have two dates2002 - Last Kennedy Half Dollar released for circulation 2015 - Special 50th Anniversary Kennedy Half Dollar