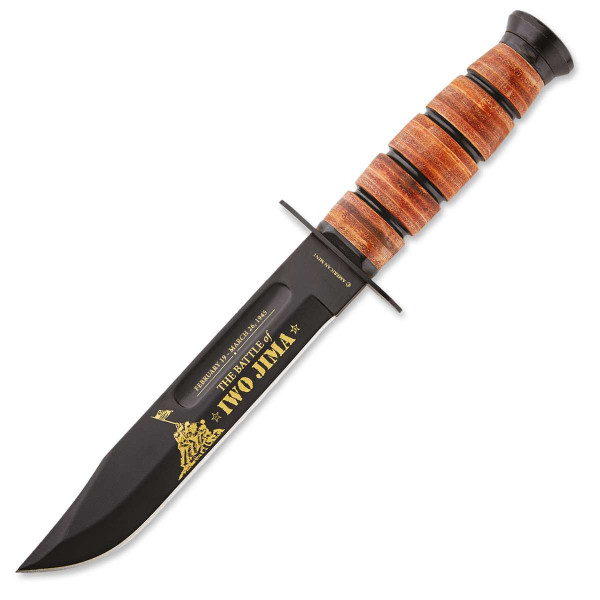 Includes a free preview of future issues in the collection America at War-WWII Knives. For more information, please refer to the Satisfaction Guarantee tab below. If you do not wish to preview future issues in the collection, you may purchase the single item using the 'Individual Item Only' tab at right.
Price $99.95 * $29.95
Total: $29.95
You save $70.00
Total: $99.95
Tweet
Share
Description Satisfaction Guarantee
Description
Located about 650 miles from Japan, the strategically placed island of Iwo Jima represented the... more
Close menu
Iwo Jima Military Bowie Knife

Located about 650 miles from Japan, the strategically placed island of Iwo Jima represented the difference between victory and defeat for the Allied forces in the Pacific Theater. Following eight months of preparation and three continuous days of pre-invasion bombing, U.S. Marines stormed the shores of Iwo Jima in an attempt to take the island. Their primary objective was to secure control overa dormant volcano named Mount Suribachi, the high ground and control point for the rest of the island.

The battle lasted a grueling four days. Even with the pre-invasion airstrikes and artillery barrages, the Japanese still maintained a significant defensive presence on the island. The black sands of Iwo Jima would have to come inch by inch for the 70,000 Marines attempting to take thehill. Fighting through repeated banzai charges, concrete bunkers and dense jungle environment, the Marines often had to engage their foes in hand-to-hand combat, relying on their tenacity and trustedKa-Bar combat knives that came into regular service in 1944.

Finally, after suffering staggering losses, the Marines gained control of the summit on February 23, 1945. That event was captured in one of the most iconic military photos of ever taken and provided inspiration to a nation weary from war. Just over a month later, and at the cost of 25,000 casualties - including close to 7,000dead - Allied forces claimed victory over the entire island, and the battle was over. These heroic sacrifices helped the Allies gain air superiority over the Pacific and victory in the second world war.

The American Mint Iwo Jima Knife Honor that sacrifice and commemorate one of the most important battles in military history with the Iwo Jima Miltary Knife. Available exclusively from American Mint, the limited-edition Battle of Iwo Jima knife is exquisitely crafted in 420 stainless steel and is designed to resemble the same combat knives carried by U.S. Marines in the Pacific Theater during World War II.

The Iwo Jima knife measures 12" with a 7.125" blade. The blade has a black matte finish, and each side features a gold-tone tribute that honors the battleand the courageous individuals who fought in it. The rugged, hardened rubber handle is tough and wrapped with specially treated leather grips to replicate the true look and feel of the Marine Corps' classic fighting weapon.

Order the WW2 Iwo Jima Knife The Iwo Jima Military Knife is part of our collection of America-at-War WWII Knives and is backed by our satisfaction guarantee. We also have a wide selection of combat knives and bowie knives available, featuring other prominent figures and events from history. To order yours, choose whether you want to make a one-time purchase or save by subscribing to the set, add the Iwo Jima knife to your cart, and proceed to our secure checkout.