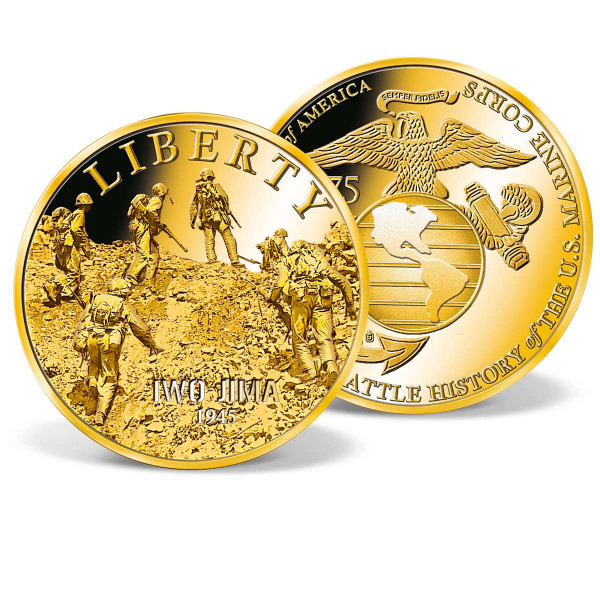 Total: $79.95
Tweet
Share
Description
Description
The Battle of Iwo Jima was one of the most important battles fought in the Pacific Theater... more
Close menu
Iwo Jima Commemorative Coin

The Battle of Iwo Jima was one of the most important battles fought in the Pacific Theater during World War II, and it was a turning point for the Allied campaign against the Imperial Japanese Navy. Iwo Jima was a relatively small island, but it held significance as a landmass with three airfields capable of supporting an air campaign against the country of Japan, located only 650 miles away. Victory would mean a direct shot at Japan, but success would come at a high cost.

Starting on February 16, 1945, the Allies, led by U.S. forces, began sustained aerial and naval bombardment against the Japanese defenses. The Japanese were prepared and took refuge in a connected network of concrete bunkers hidden under the dense jungle canopy, leaving their forces mostly intact. After three days of shelling, on February 19, U.S. Marines boarded amphibious assault vehicles and landed on the island's black sandy beaches. Their goal was to reach and secure Mount Suribachi, a dormant volcano with a view of the entire battlefield.

After four days of taking hard-won ground inch by inch, the Marines reached their objective and raised the American flag, inspiring their fellow combatants and a nation worn weary by the prolonged war. Following another long month of continued fighting, the Allies claimed victory over Iwo Jima, but only after taking 25,000 casualties and suffering almost 7,000 dead. Their sacrifice ultimately led to victory in the Pacific and the end of World War II.

The obverse features a highly detailed engraving of U.S. Marines climbing the hill and successfully taking Mount Suribachi during the battle of Iwo Jima, pictured as they were moments before reaching the summit and raising the flag. The reverse side of the Iwo Jima Commemorative Coin features the U.S. Marine Corps logo - a prominent eagle, globe, and anchor design known across the world. The coin itself is dated 1775, the same year the Marine Corps was established, to reflect their rich history of defending the nation.

Order an Iwo Jima Commemorative Coin Today The Iwo Jima Commemorative Coin makes an excellent gift or addition to your collection. This coin weighs well over an ounce and is a must-have for anyone interested in World War II history. To complete any collection, browse our other commemorative coins featuring historical figures, events, and more. When you order the Iwo Jima gold coin, you can choose how many you would like and add them to your cart. Then use our secure checkout to complete your order.