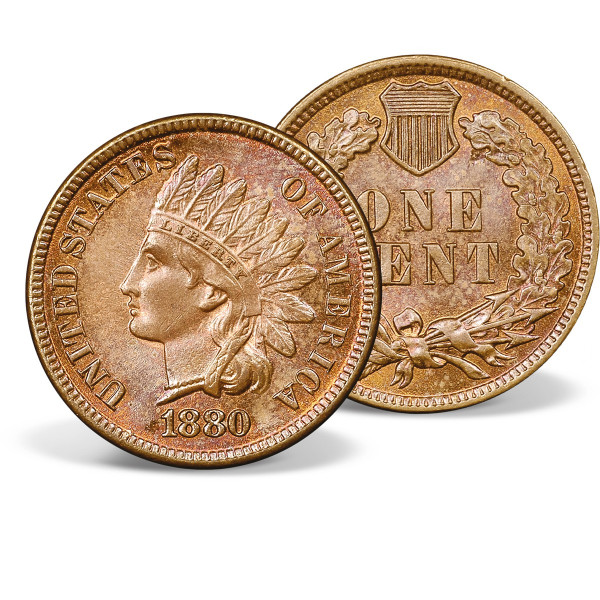 Includes a free preview of future issues in the collection 19th-Century Baker's Dozen. For more information, please refer to the Satisfaction Guarantee tab below. If you do not wish to preview future issues in the collection, you may purchase the single item using the 'Individual Item Only' tab at right.
Total: $99.95
Total: $99.95
Tweet
Share
Description Satisfaction Guarantee
Description
The 1907 Indian Head penny is one of the most iconic coins ever produced by the United States... more
Close menu
Indian Head Penny

The 1907 Indian Head penny is one of the most iconic coins ever produced by the United States Mint. It remains a coveted item by serious numismatists and casual coin collectors alike. American Mint, a leading online provider of coins and collectibles, is pleased to offer this fascinating piece of our nation's history for sale to our customer base.

Origins of the Indian Head Cent The U.S. Indian Head penny represented a significant change in the design of the one-cent piece. The original penny, minted from 1793 to 1857, was a copper coin roughly the size of a half dollar. Because of its size, collectors often refer to a penny from this era as a "large cent." While the design underwent several modifications over the years, the depiction of Lady Liberty on the obverse was a consistent feature for the duration of the series.

The Discovery of Gold Altered the Course of the American Penny In early 1848, a carpenter named James Wilson Marshalldiscovered gold near Coloma, California, while building a sawmill owned by John Sutter. The news of Marshall's find spread quickly, and people from across to the U.S. flocked to the site. The ensuingCalifornia Gold Rush led to the discovery of large quantities of gold in the region. However, the introduction of a high volume of gold into the economy over the next few years sparked inflation and caused the cost of other metals, including copper, to rise.

Because of the rapidly increasing price of copper, the United States Mint began to seek ways to reduce its production costs for thepenny. In 1857, the Mint unveiled a substantially smaller one-cent piece that included nickel in its composition. The newly minted Flying Eagle penny consisted of 88% copper and 12% nickel.

The Birth of the Indian Head Penny The Flying Eagle penny didn't last long -- the piece's design caused production issues, and the Mint quickly initiated a search for a replacement. In 1858, the Mint's director chose a design created by James Barton Longacre, the Philadelphia Mint's chief engraver, for the upgraded one-cent piece. According to legend, Longacre modeled the image afterhis daughter Sarah. As the story goes, Sarah was visiting the mint one day while Longacre was working and tried on a headdress, which served as the inspiration for the design.

The first minting of the Indian Head cent occurred in 1859 and featured a youthful Miss Liberty adorned with a Native American headdress. The reverse depicted the words "ONE CENT" in capital letters encircled by alaurel wreath. A design upgrade in 1860 replaced the laurel with an oak wreath, along with a shield at the top.

The Civil War and the Redesign of the US Indian Head Penny The onset of the American Civil War in 1861 and the subsequent economic turmoil ultimately led to the passage of the Coinage Act of 1864. Under the act, metal coins became legal tender for the first time in U.S. history. However, it did not allow for the redeeming of one-cent pieces in bulk. Speculators bought up copper-nickel coins in large quantities and did not circulate them.

Consequently, the Mint began producing bronze pennies (bronze is an alloy consisting of 95% copper and small amounts of tin and zinc) featuring a modified Longacre design with the initial "L." The new bronze coins helped to alleviate the penny shortage.

The Post-War Era and the End of the Indian Head Penny Full-scale production of the penny resumed after the war, with only a few subtlechanges to the Longacre design occurring over the years. Then, in 1890, the U.S. Congress passed a law that allowed the Mint to change coin designs without the need for legislative authorization. In 1904, President Theodore Roosevelt sought to redesign several coins, including the penny. This ultimately led to the unveiling of the Abraham Lincoln penny in 1909, bringing the 50-year run of the Indian Head cent to an end.

Why Collect Indian Head Pennies? In recent years, Indian Head cents have become harder to find. Once plentiful, most of these important coins have foundtheir way into private collections or have been made into jewelry. Because of their increasing scarcity, the demand for Indian head pennies has increased accordingly. A higher demand often leads to anincrease in value, which is why more collectors are turning their attention to this enduring symbol of American coinage history.

Determining Indian Head Penny Values As with all coins, calculating a 1907 Indian Head penny's value requires the evaluation of several factors. The piece's condition is the most crucial variable. The 70-point Sheldon Scale is the standard for rating a coin's condition. For example, a 1907 one-cent Indian Head penny with a grading of MS-63 (70 would be a perfect score and indicates that the item is in mint condition) could be worth $200 or more.

Why Purchase a 1907 Indian Head Penny From American Mint? Although an original 1907 Indian Head cent is becoming increasingly harder to find, you can count on American Mint to have an abundant supply on hand. Our pennies are in very fine" condition, which means they exhibit only some light wear over the high points. We'll also include a Certificate of Authenticity, whichis your assurance that you're receiving an authentic piece of U.S. currency.

You'll Get a Great Price on Your Indian Head Penny Another great reason to purchase all of your coins and collectibles from American Mint is our commitment to selling high-quality products at affordable prices. We're offering the 1907 Indian Head penny for sale online right now at a deeply discounted price. You'll also get free shipping and handling if your order totals at least $150. If you spend more than $100, you can choose to pay in interest-free monthly installment to make your purchase even more budget-friendly.

Order Your Indian Head Pennies Today! Use our fast, convenient, secure checkout process to complete your Indian Head cent order. While you're here, whynot take a look at the rest of our lineup of high-quality U.S. currency and commemorative coins to round out your collection? We also offer an assortment of other outstanding collectibles like, Bowieand pocket knives, fine jewelry, and much more.

If you have questions or need assistance, feel free to give our friendly, knowledgeable customer service team a call at 1-877-807-MINT from 8a.m. to 8 p.m. EST Monday through Friday. We'll do whatever it takes to improve your customer experience.