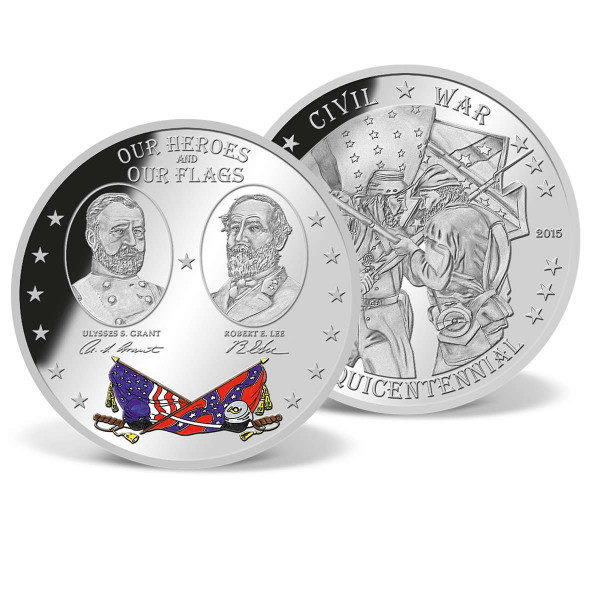 Includes a free preview of future issues in the collection Civil War Battle Flags. For more information, please refer to the Satisfaction Guarantee tab below. If you do not wish to preview future issues in the collection, you may purchase the single item using the 'Individual Item Only' tab at right.
Price $99.95 * $19.95
Total: $19.95
You save $80.00
Total: $99.95
Tweet
Share
Description Satisfaction Guarantee
Description
The Civil War lasted for four years, from 1861 to 1865. In that time, heroes rose to command and... more
Close menu
Heroes and Flags of the Civil War Commemorative Color Coin

The Civil War lasted for four years, from 1861 to 1865. In that time, heroes rose to command and defend, whether on the Confederate or Union side. As the Civil War pit man against man, brother against brother, leaders were born.

Both generals were considered American heroes, as they fought as brave soldiers and commanded as beloved leaders. Today, we remember them as part of a war that divided the nation and provided turning points for the country's future. Remember the history and the leaders with the Heroes and Flags of the Civil War Commemorative Color Coin.

About the Civil War Coin - Our Heroes and Our Flags This Heroes and Flags of the Civil War Commemorative Color Coin serves as a dazzling tribute to legends of the Confederate and Union states. On the obverse, Generals Robert E. Lee and Ulysses S. Grant pose encircled above their respective names and signatures. Below them are full-color renditions of the Union flag and the Confederate battle flag. This side also features a border of stars along the side and the words "Our Heroes and Our Flags," proudly embossed at the top.

The reverse of the Civil War battle flags coin depicts soldiers from both sides of the war, confronting each other in battle. Behind them fly the Confederate and Union flags. At the top of the border of the coin are the words "Civil War." Stars also dot the border, and the bottom says, "Sesquicentennial," representing the 150th anniversary of the Civil War that this coin remembers.