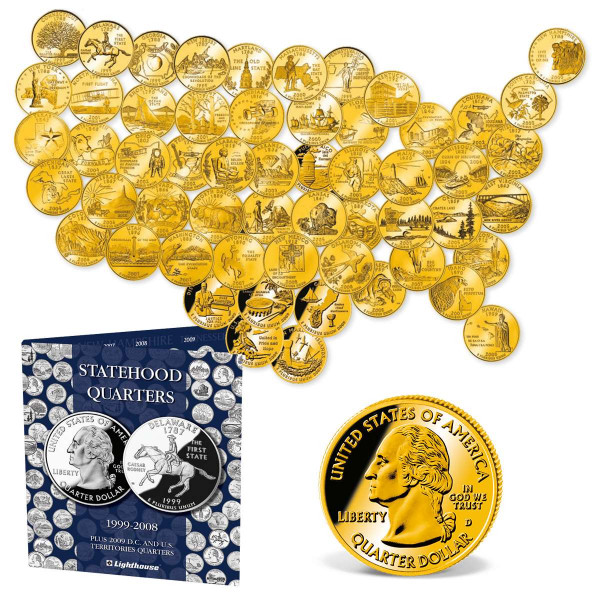 Launched in 1999, the U.S. Mint's 50 State Quarters Program was a 10-year initiative that honored each of the nation's states in the order that they ratified the Constitution or were admitted intothe Union.

From 1999-2008, 5 new quarters were released every year. Each design was produced for about 10 weeks and, by law, can never be produced again. All the coins shared a common obverse which featured the familiar profile of George Washington that has been the face of U.S. quarters since 1932, when it was introduced to commemorate the 200th Anniversary of Washington's birth. However the inscriptions - "United States of America," "Liberty," "In God We Trust," and "Quarter Dollar" were moved to the obverse so the reverse would be a blank canvas for each state's unique design. Each state got to design their own reverse and they used the unique platform to celebrate their historic past and to help promote its future through creative and beautiful designs.

The State Quarter Program was an instant hit. It created the perfect platform for collectors - both experienced numismatists and young beginners - to build a complete series that was both beautiful and educational. In fact, the series has been credited with creating thousands of new coin collectors by providing a way for ordinary people to build impressive collections from circulating coins found in their pocket change. Unfortunately, certain quarters became scarce and were hoarded by collectors, making the idea of a complete collection hard to achieve.

Following on the heels of the long-running and highly popular 50 State Quarters Series, the U.S. Mint kicked off the D.C. & U.S. Territories Quarters Program in 2009. The series consisted of six coins featuring Washington, D.C., Puerto Rico, Guam, American Samoa, the U.S. Virgin Islands, and the Northern Mariana Islands. Like the State Quarters, the coins share the George Washington obverse. These U.S. Territory Quarters, all released in 2009, have some of the lowest mintages since the 1960s. With low production numbers and high collectibility value, these 6 coins have become increasingly difficult to find in circulation. This makesit very difficult to collect a complete series on your own.