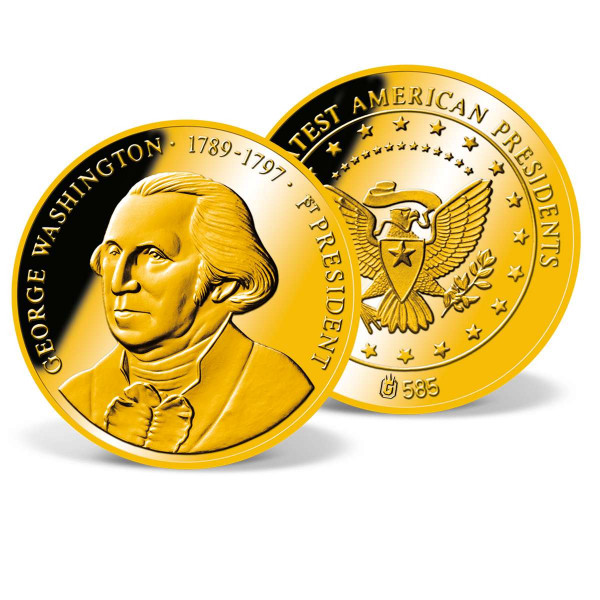 Includes a free preview of future issues in the collection The greatest U.S.Presidents. For more information, please refer to the Satisfaction Guarantee tab below. If you do not wish to preview future issues in the collection, you may purchase the single item using the 'Individual Item Only' tab at right.
Price $129.95 * $29.95
Total: $29.95
You save $100.00
Total: $129.95
Tweet
Share
Description Satisfaction Guarantee
Description
It's safe to say that without the contributions of George Washington, the United States of... more
Close menu
George Washington Commemorative Gold Coin

It's safe to say that without the contributions of George Washington, the United States of America would not exist today. Known as the "Father of Our Country," this surveyor and farmer rose to prominence as a military officer during the French and Indian War in the 1750s. He later played a pivotal role in America's long and bloody struggle for independence from Great Britain.

When the Second Continental Congress assembled in Philadelphia in 1775, George Washington was elected Commander in Chief of the Continental Army. He took command of his troops and embarked on a war that would last six years. In 1781, with the aid of French allies, he forced the surrender of Cornwallis at Yorktown. When the new Constitution was ratified, he was elected President.

Washington's leadership on the battlefield won America its independence, but it was his leadership in office that created the mold from which the United States was cast.

American Mint's Glittering George Washington Gold Coin American Mint is pleased to offer the beautiful George Washington commemorative coin for sale. Meticulously designed, this dazzling tribute to the first President ofthe United States features a highly detailed engraving of George Washington on the obverse and is minted in a limitation of only 9,999 complete collections worldwide. The coin's reverse is fittinglyentitled "America's Greatest Presidents."

Our George Washington Gold Coin Meets the Highest Standards This solid 14k gold coin is minted to the highest quality "Proof" standard.As your reliable partner for all collecting, you'll appreciate the exceptional craftsmanship we've put into this coin and the others in our extensive collection. We know you'll be proud to display itin your home or office and show it off to your fellow collectors. The George Washington commemorative gold coin will likely become a treasured heirloom that will remain in your family.

OurGeorge Washington First President gold coin comes in a protective capsule to preserve it for generations to come  a true collector's item. You'll also receive a Certificate of Authenticity that ensures you're getting the "real" piece and not an inferior imitation.

You'll Always Get a Great Price at American Mint We're currently offering the commemorative George Washingtoncoin for sale at an incredibly low online price. If you're looking to build your collection quickly, add several pieces to your order and get free shipping and handling. You can even choose to make monthly installment payments with no interest charges if you meet the minimum order guidelines.

Get Your George Washington Gold Coin Today! Ordering commemorative coins from American Mint online is fast, easy, and secure. If you have questions or need assistance, give our customer service team a call toll-free at 1-877-807-MINT on weekdays. We'll be happy to help you!