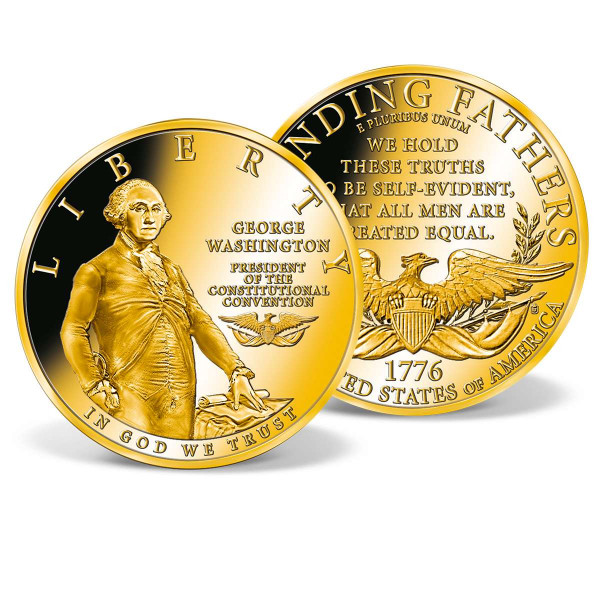 Includes a free preview of future issues in the collection Founding Fathers of America. For more information, please refer to the Satisfaction Guarantee tab below. If you do not wish to preview future issues in the collection, you may purchase the single item using the 'Individual Item Only' tab at right.
Price $79.95 * $19.95
Total: $19.95
You save $60.00
Total: $79.95
Tweet
Share
Description Satisfaction Guarantee
Description
When the fire of revolution ignited in the colonies, George Washington was chosen as... more
Close menu
George Washington Commemorative Coin

When the fire of revolution ignited in the colonies, George Washington was chosen as Commander-in-Chief of the colonial forces during the American Revolution. History tells of his strength and leadership as beleaguered colonial troops battled against the mighty British armies. Where others might have given up, Washington fought on. After accepting the British surrender that ended the Revolutionary War, Washington retired from public life. In 1787, Washington reluctantly agreed to come out of retirement to attend the Constitutional Convention and was unanimously elected its president. The historic result of the Convention was the crafting of the U.S. Constitution. But the nation wasn't done with this great man. In 1789, he was unanimously elected as the first President of the United States of America. Called "The Father of Our Country," Washington led the nation with honor, pride and dignity. His profound achievements and devoted service built the foundation of a powerful nation andhave served as a role model for every President since.

This Official American Mint Release celebrates our nation's first President. The obverse features a highly detailed portrait of GeorgeWashington in his role as President of the Constitutional Convention. The reverse is a tribute to all of our nation's Founding Fathers with a heraldic eagle below a famous line from the Declaration ofIndependence. Minted to the highest quality "Proof" standard, this AMERICAN MINT EXCLUSIVE coin is layered in 24k gold and comes in its own protective capsule to preserve its golden luster for futuregenerations.