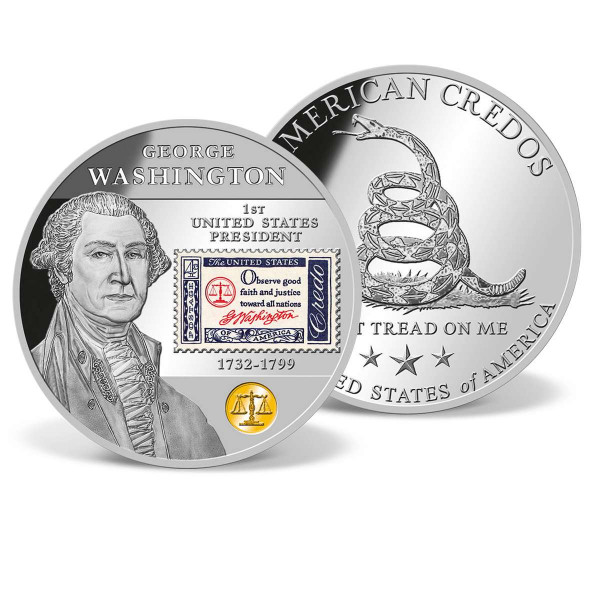 Includes a free preview of future issues in the collection American Credo Coin Collection. For more information, please refer to the Satisfaction Guarantee tab below. If you do not wish to preview future issues in the collection, you may purchase the single item using the 'Individual Item Only' tab at right.
Price $129.95 * $19.95
Total: $19.95
You save $110.00
Total: $129.95
Tweet
Share
Description Satisfaction Guarantee
Description
In 1796, our nation's first President, George Washington, delivered his farewell speech urging... more
Close menu
George Washington American Credo Stamp Commemorative Coin

In 1796, our nation's first President, George Washington, delivered his farewell speech urging unity among the states and discouraging American involvement in European military affairs. He foresawAmerica's rise to a world power if the young nation was given a chance to nourish the fledgling democracy.

American Mint Proudly Offers a Beautiful George Washington American Credo Stamp Coin for Sale Available exclusively from American Mint, this 70 mm coin is highlighted by a brilliant, full-color reproduction of the 1960 American Credo postage stamp featuring George Washington. The coin's obverse includes a masterful portrait of Washington and a remarkably detailed replication of the stamp. This stunning 2.75" coin is minted to the highest quality "Proof standard. It's luxuriously plated in gleaming silver with pad print and spot gold to add the perfect finishing touches. The reverse features the famous "Don't Tread on Me" credo and coiled snake found on the so-called Gadsen flag that inspired Colonial forces during the American Revolution.

We've limited the minting of the George Washington American Credo Stamp Coin to just 9,999 complete collections worldwide, so be sure to get yours before supplies run out. You'll also receive a Certificate of Authenticity, which certifies the coin's size and materials and provides an assortment of interesting facts about the piece.

Order Your Stamp Coin Online and Save Purchaseyour George Washington American Credo Stamp Coin today and take advantage of our low online pricing. To order, add the item to your shopping cart and complete the fast, secure checkout process.