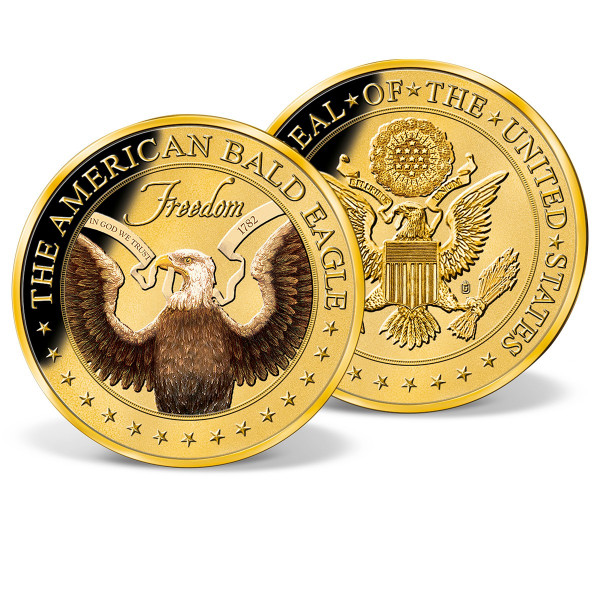 Includes a free preview of future issues in the collection Great Seal of the U.S.. For more information, please refer to the Satisfaction Guarantee tab below. If you do not wish to preview future issues in the collection, you may purchase the single item using the 'Individual Item Only' tab at right.
Price $89.95 * $19.95
Total: $19.95
You save $70.00
Total: $89.95
Tweet
Share
Description Satisfaction Guarantee
Description
The history of the Great Seal began on July 4, 1776, the day America declared its independence.... more
Close menu
Freedom - Great Seal Commemorative Coin

The history of the Great Seal began on July 4, 1776, the day America declared its independence. That same day, the Continental Congress appointed a special committee to design an official seal to legitimize international treaties and transactions for the new nation. It took 6 years, but on June 20, 1782, Congress adopted a design for the Great Seal of the United States. The emblem included a heraldic bald eagle grasping olive branches to symbolize peace and arrows to represent strength. The bald eagle's majestic appearance on the seal created a very powerful image and inspired Congress to officially name it our national symbol in 1789.

Available exclusively from American Mint, this 24k gold-layered coin is our official tribute to the American bald eagle and to the freedom it represents. Minted to the highest quality "Proof" standard, it features magnificently detailed elements with a polished finish that stand out on the coin's matte-finished background. On the obverse anAmerican bald eagle with a banner in its beak reading "In God We Trust" and "1782," is beautifully accented in full color. The reverse features the Great Seal of the United States.