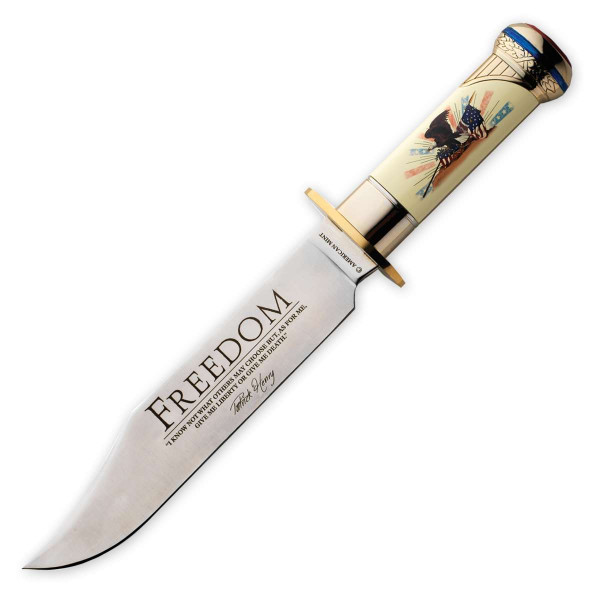 Includes a free preview of future issues in the collection American Virtues Bowie Coll.. For more information, please refer to the Satisfaction Guarantee tab below. If you do not wish to preview future issues in the collection, you may purchase the single item using the 'Individual Item Only' tab at right.
Price $99.95 * $29.95
Total: $29.95
You save $70.00
Total: $99.95
Tweet
Share
Description Satisfaction Guarantee
Description
Made famous by frontiersman and legendary folk hero Jim Bowie, the Bowie knife has become a... more
Close menu
Freedom Bowie Knife

Made famous by frontiersman and legendary folk hero Jim Bowie, the Bowie knife has become a classic American blade prized by hunters and collectors alike. But the first Bowie knife was quite different from the current image we identify with Bowie knives.

Designed by Jim's brother Rezin and forged by blacksmith Jesse Clift, the original Bowie knife was little more than a butcher's knife with a thin blade that Jim carried in a leather sheath. Jim and his knife gained national notoriety in 1827 in the aftermath of a brawl known as the Sandbar Fight, which erupted following a formalduel between members of two wealthy Louisiana families. Though accounts of the chaotic melee differ, all agree that Jim Bowie suffered several stab wounds in addition to three or four gunshot wounds,but managed to survive thanks to his prowess with his deadly blade. After the infamous fight, Jim never went anywhere without carrying a blade on him.

The Bowie knife became well-known throughout the country and can be found with several variations, but the main details that define the Bowie knife include: a long blade usually 8 to 12 inches in length, a sturdy crossguard to protect thehand, and most importantly, the clip point, which is the upper edge of the blade that curves down to a point and provides stability and handling. Today, the Bowie knife remains a popular and respected piece and has earned its place in the pantheon of classic American weapons alongside other legends like the Colt revolver.