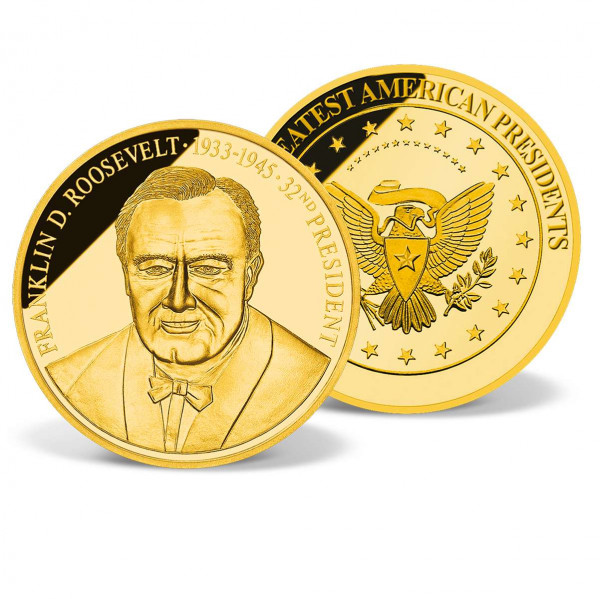 Includes a free preview of future issues in the collection Greatest American Presidents +. For more information, please refer to the Satisfaction Guarantee tab below. If you do not wish to preview future issues in the collection, you may purchase the single item using the 'Individual Item Only' tab at right.
Price $39.95 * $9.95
Total: $9.95
You save $30.00
Total: $39.95
Tweet
Share
Description Satisfaction Guarantee
Description
Few leaders have had a more measurable and lasting impact on the course of our great nation than... more
Close menu
Franklin D. Roosevelt Commemorative Coin

Few leaders have had a more measurable and lasting impact on the course of our great nation than Franklin Delano Roosevelt. Born into a life of wealth and privilege, FDR nevertheless identified with the plight of the "common man" during one of the darkest economic periods in American history. He also served as commander in chief at the height of a tumultuous world war that still has significantgeopolitical implications to this day.

Franklin D. Roosevelt was elected to the first of four terms as President in November 1932. Assuming the Presidency at the depth of the Great Depression, he promised prompt and vigorous action, asserting in his Inaugural Address, "...the only thing we have to fear is fear itself." His experimental economic and social program known as the "New Deal"helped bring about a national economic recovery.

When the U.S. was drawn into World War II in 1941, Roosevelt committed the nation's workforce and resources to defeat the fascist powers ofGermany, Japan, and Italy. Roosevelt passed away a few weeks before Germany surrendered, but under his leadership, the U.S. emerged from World War II as the world's foremost economic, political, and military power.

Our Franklin D. Roosevelt Commemorative Gold Coin Honors the Legacy of FDR At American Mint, we're proud to offer the gleaming Franklin Roosevelt commemorative coin for sale. Meticulously designed, this dazzling tribute to America's 32nd President features a highly detailed engraving of FDR on the obverse. The reverse bears the legend "The Greatest American Presidents" and features the majestic image of a bald eagle  a symbol that most Americans equate with the quest for freedom and independence that epitomizes our great nation.

Quality Is the Defining Characteristic of the Franklin D. Roosevelt Commemorative Coin We've minted the Franklin Delano Roosevelt commemorative coin to the highest quality "Proof" standard and layered itin 24k gold. You'll marvel at the craftsmanship and attention to detail. We make every effort to create and assemble exceptional coin collections that make our customers proud to own and display in their homes, offices, and business establishments  and show off to other collectors.

Another American Mint Exclusive The Franklin D. Roosevelt commemorative coin is available exclusively from American Mint and is limited to only 9,999 complete collections worldwide. It comes in a protective capsule to preserve it for generations to come  a true collector's item. You'll alsoreceive a Certificate of Authenticity that certifies its size and materials and contains a variety of interesting facts about the piece.

Get Low Online Prices Every Day at American Mint Purchase your beautiful Franklin Roosevelt commemorative coin at an amazingly low online price. Add more coins or collectibles to your order and get free shipping and handling, which applieswhen you spend at least $150. You can also choose to pay in interest-free installments if your order exceeds $100.

Place your order today, and don't forget to check out our extensive selection of commemorative coins and other fabulous collectibles!