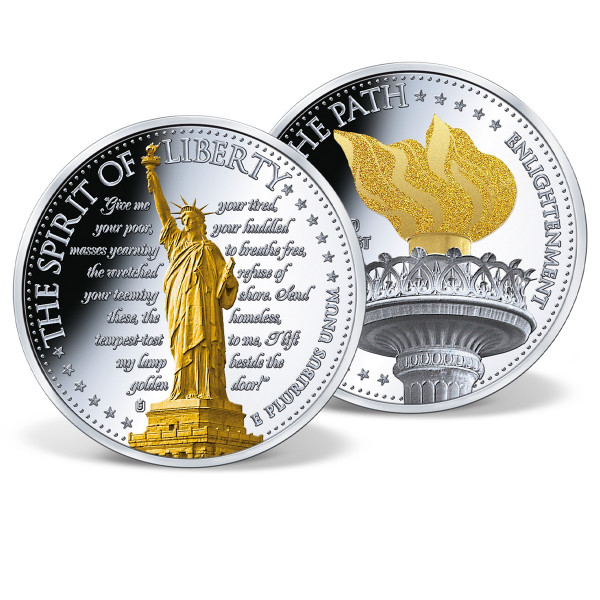 Total: $89.95
Tweet
Share
Description
Description
Her official name is "Liberty Enlightening the World," but everyone knows her as the Statue of... more
Close menu
Enlightenment Commemorative Coin

Her official name is "Liberty Enlightening the World," but everyone knows her as the Statue of Liberty. The 151-foot tall, copper-clad beauty was conceived by sculptor Frédéric Auguste Bartholdi asa gift from the people of France to the United States for the centennial celebration of America's independence. Officially dedicated on October 28, 1886, she still stands atop her massive granite pedestal on Liberty Island in the middle of New York Harbor.

The star-shaped wall encompassing the statue's pedestal got its pointed configuration from the old fort that once stood in its place. Ironically, the little island that once served as the first line of defense against foreign invasion would become the first glimpse of freedom for millions of immigrants as they arrived in Americaat nearby Ellis Island

In Liberty's right hand is the Torch of Enlightenment. The torch's flame has a golden finish to shine in the sun and light the way to freedom. Today, the Statue of Liberty is our nation's greatest symbol of freedom, representing the American dream and holding the eternal flame of liberty high for the entire world to see.

Available exclusively from American Mint, this limited-edition coin has been specially minted to celebrate our nation's greatest symbol of freedom. Minted to the highest quality "Proof" standard and plated in .999 pure silver, this impressive coin is a full 2" in diameter. The obverse has Liberty's golden torch magnificently accented in 24k gold with a sparkling diamond-dust effect finish. The reverse is a tribute to the Statue of Liberty with her image accented in shiny 24k gold.