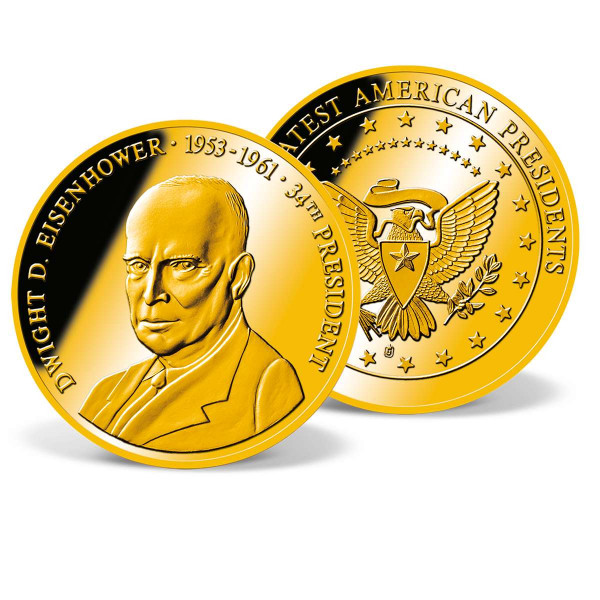 Includes a free preview of future issues in the collection Greatest American Presidents +. For more information, please refer to the Satisfaction Guarantee tab below. If you do not wish to preview future issues in the collection, you may purchase the single item using the 'Individual Item Only' tab at right.
Price $39.95 * $9.95
Total: $9.95
You save $30.00
Total: $39.95
Tweet
Share
Description Satisfaction Guarantee
Description
Dwight D. Eisenhower was one of the most notable and distinguished soldiers and statesmen in... more
Close menu
Dwight D. Eisenhower Commemorative Coin

Dwight D. Eisenhower was one of the most notable and distinguished soldiers and statesmen in 20th-century America. Born in Denison, Texas in 1890 and raised in Kansas, "Ike" went on to attend the U.S. Military Academy at West Point. Upon graduating in 1915, Eisenhower embarked on a long, successful career in the military, which ultimately served as a pathway to the White House.

Afterserving as Supreme Commander of Allied troops on D-Day in 1944 and NATO forces in 1951, Dwight D. Eisenhower was elected 34th President of the United States. Bringing to the presidency his expertise as a military commander, Eisenhower negotiated an end to the Korean War, worked to ease Cold War tensions between the U.S. and the Soviet Union, and fought for a balanced budget and Civil Rights back home.

Our Dwight Eisenhower Gold Coin Honors the Legacy of this True American Hero and Patriot Available exclusively from American Mint, this exquisite, 24k gold-layered coin features a highly detailed portrait of President Eisenhower on the obverse. Minted to the highest quality "Proof" standard, it comes in a protective capsule to preserve its glorious luster for future generations. The piece's reverse bears the legend "The Greatest American Presidents" and depicts a majestic bald eagle, the enduring symbol of American liberty and independence.

You'll Marvel at the Quality of Our Dwight D. Eisenhower Commemorative Coin As with every piece in our collection, the Dwight Eisenhower coin exhibits remarkable craftsmanship and extraordinary attention to detail. Our in-house experts create and assemble unique collections that never fail to impress. You'll also receive a Certificate of Authenticity that certifies the coin's size and materials andprovides a variety of interesting facts about the item. You'll know you're getting a genuine, high-quality product you'll be proud to make a part of your collection.

Get the Best Value for Your Money at American Mint If you're tired of paying too much for collectibles, you'll love doing business with American Mint. Order your Eisenhower coin online today at an incredibly lowonline price. If you're thinking of adding several pieces to your collection, you may qualify for free shipping and handling, which applies to all orders of at least $150. You can also elect to pay in interest-free installments if your order exceeds $100.

Purchase Your Dwight Eisenhower Commemorative Coin Today! We've limited the minting of our Dwight Eisenhower coin to 9,999 complete collections  order yours now before it's too late! If you have questions or need help, don't hesitate to give our courteous customer service representatives a call. We're available from8 a.m. to 8 p.m. EST Monday through Friday.