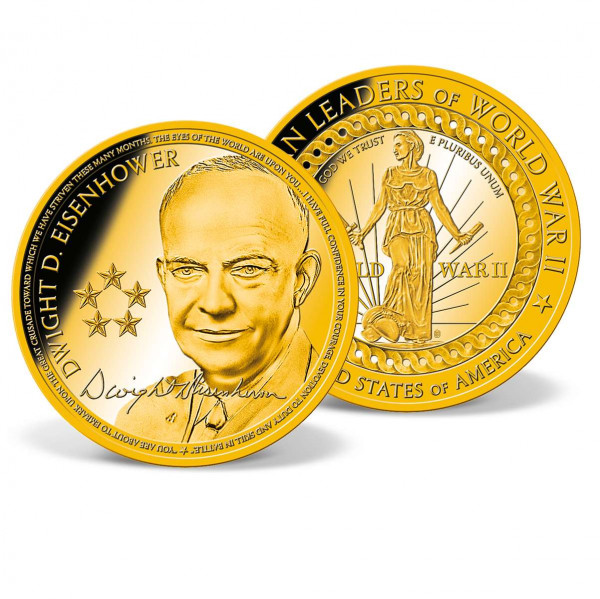 Seven days after the bombing of Pearl Harbor, a little-known Brigadier General by the name of Dwight D. Eisenhower was called to Washington as a strategic planner. Five years later, "Ike" had risento the rank of Five-Star General and was named Supreme Commander of Allied forces in World War II. He was the principal architect of the successful Allied invasion of Europe and the subsequent defeatof Nazi Germany.

After the war, he was named the first Supreme Commander of NATO forces. His brilliance as a strategist and diplomat eventually led Ike to his greatest accomplishment: becoming the 34th President of the United States.

We're Pleased to Offer the Beautiful Dwight D. Eisenhower Commemorative Coin for Sale Available exclusively from American Mint, thisincredible tribute to the Supreme Commander of Allied forces in World War II features a highly detailed engraving of Five-Star General Dwight D. Eisenhower and an excerpt from his pre-battle speech given before D-Day on the obverse. Minted to the highest quality "Proof" standard and layered in 24k gold, it is an incredible 2.75" in diameter. You'll also receive a Certificate of Authenticity thatverifies the size and materials and contains historical information about the item.

Order Your Gold-Layered Dwight D. Eisenhower Commemorative Coin While the Supply Lasts A stirring tribute to one of the greatest military leaders in our nation's history, the magnificent Dwight D. Eisenhower commemorative coin is limited to only 9,999 complete collections worldwide and comesencased in a protective capsule to preserve it for future generations. Don't wait until it's too late to make this unique piece a part of your collection!

We're Offering the Dwight D. Eisenhower Commemorative Coin at a Deeply Discounted Online Price At American Mint, we always strive to give our customers the best value for their hard-earned money. You can purchase the Dwight D. Eisenhower Allied Supreme Commander coin online right now at a significantly discounted price. Add other pieces to your order and get the benefit of free shipping and handling, which applies to all purchases of at least $150. You can also pay in interest-free monthly installments if you spend more than $100.

Order the Beautiful Dwight D. Eisenhower Commemorative Coin From American Mint to Right Now! Place your Dwight D. Eisenhower coin order online quickly and securely here at our e-commerce store. Feel free to give us a call Monday through Friday from 8 a.m. to 8 p.m. EST if you have questions or need assistance.