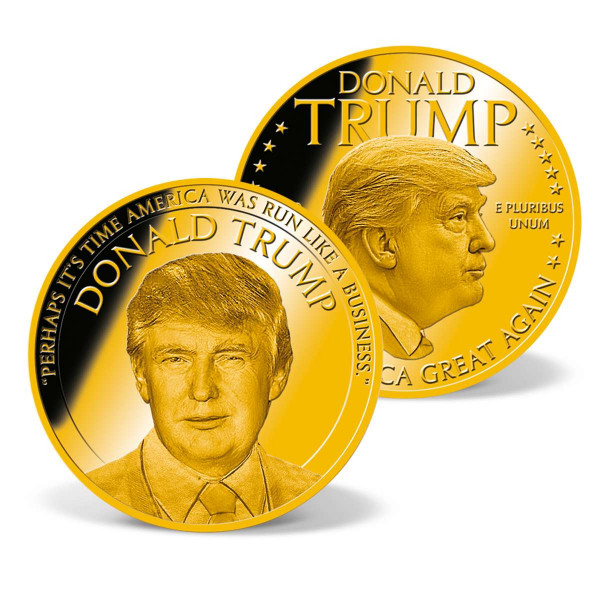 Known for speaking his mind and offering no apologies for his opinions, Donald Trump has turned the 2016 presidential race upside down. Officially securing his party's presidential nomination at the Repulican National Convention, Trump defeated the Democratic nominee, Hillary Clinton, to secure his place as the next President of the United States.

Drawing attention to domestic issues,such as illegal immigration, outsourcing American jobs, the U.S. national debt, and Islamic terrorism, Trump's no-nonsense approach to important issues has endeared him to a voting public that has become increasingly frustrated with the American political machine.

On November 8, 2016, America elected Donald Trump as its 45th President. His mission began on January 20, 2017, when he tookthe Oath of Office and was sworn in as the 45th President of the United States.

The obverse features a distinguished likeness of America's 45th president. The reverse offers a portrayal of Mr. Trump in profile, encircled by the famous "Make America Great Again" slogan that set the tone for his candidacy and his tenure in the White House.

High-Quality Coins Offering Excellent Value The Donald Trump Running America Like a Business Coin is just one example of the high level of quality and craftsmanship that goes into every piece we offer. Our privately minted coins and coin collections provide the opportunity to own a unique product you'll be proud to display in your home, office, or business establishment.

This striking coin includes a Certificate of Authenticity that certifies its size and materialsand contains a variety of interesting facts about the item. We've limited the minting, so be sure to order yours while they're still available.

Purchase Your Coin at a Discounted Price At American Mint, we strive to make collecting affordable for everyone. We're offering the President Trump commemorative coin for sale right now at a deeply discounted online price. Free shipping is available with orders of $150 or more, and you can make interest-free monthly installments if you spend more than $100.

Place Your Order Today Order your American MintDonald Trump coin online today, and be sure to take a look at all of our presidential coins as well. If you have questions, feel free to give our customer service team a call at 1-877-807-MINT on weekdays from 8 a.m. to 8 p.m. Eastern time.