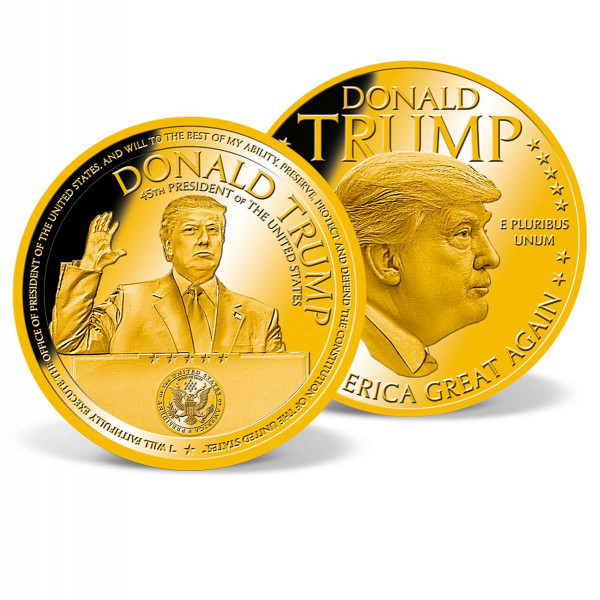 Includes a free preview of future issues in the collection The Speeches of Donald Trump. For more information, please refer to the Satisfaction Guarantee tab below. If you do not wish to preview future issues in the collection, you may purchase the single item using the 'Individual Item Only' tab at right.
Price $79.95 * $19.95
Total: $19.95
You save $60.00
Total: $79.95
Tweet
Share
Description Satisfaction Guarantee
Description
On November 8, 2016, America elected the charismatic billionaire businessman Donald Trump as its... more
Close menu
Donald Trump Oath of Office Commemorative Coin

On November 8, 2016, America elected the charismatic billionaire businessman Donald Trump as its 45th President. Riding a wave of revolution among the American electorate, his fire-brand style, nononsense approach resounded with a public that had become increasingly frustrated with the American political machine. During his historic campaign he promised to "Make America Great Again" by bringingjobs back to America, securing our borders, strengthening our military and caring for our veterans, and most of all unifying all Americans. He stands firmly in his belief that the U.S. is the greatest nation in the world and that when its people work toward a common goal, they will restore America's standing as a beacon of freedom, strength, and prosperity. President Trump begins his mission on January 20, 2017, when he takes the Oath of Office and is sworn in as the 45th President of the United States.

Available exclusively from American Mint, this official commemorative coin is luxuriously layered in 24k gold and features an exquisite portrait of President Trump taking the Oath of Office on the obverse. Minted to the highest quality "Proof" standard, this exquisite coin comes in its own protective capsule to preserve it for future generations.