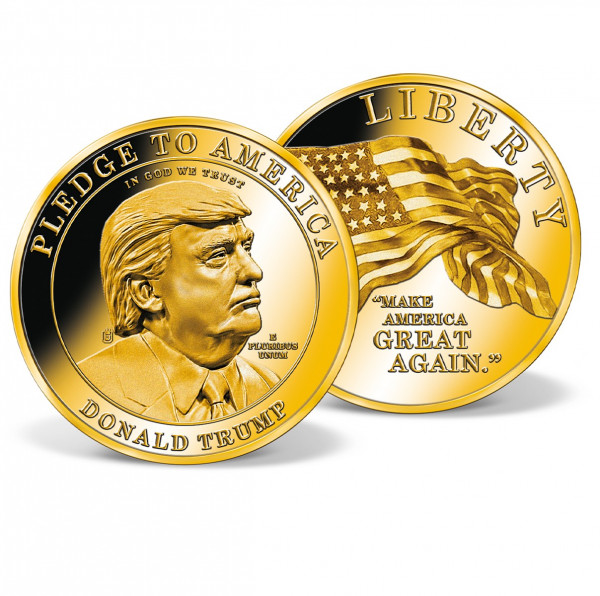 Includes a free preview of future issues in the collection Pledge To America High-Relief. For more information, please refer to the Satisfaction Guarantee tab below. If you do not wish to preview future issues in the collection, you may purchase the single item using the 'Individual Item Only' tab at right.
Price $99.95 * $19.95
Total: $19.95
You save $80.00
Total: $99.95
Tweet
Share
Description Satisfaction Guarantee
Description
From a booming economy to his strong stances and decisive actions that protect our nation... more
Close menu
Donald Trump - Make America Great Again High-Relief Commemorative Coin

From a booming economy to his strong stances and decisive actions that protect our nation against foreign forces who seek to do us harm, President Trump has proven that his commitment to putting America first was just what our nation needed. As President, he has little patience for the "status quo" that has crippled Washington politics for generations and has taken the bold steps necessary to bolster American businesses, bring jobs back to America, and secure our borders - just as he promised during his historic campaign. With strong leadership and an unwavering drive to succeed, PresidentTrump has shown that he is not afraid to do whatever it takes to "Make America Great Again" and restore our nation's standing as the world's beacon of freedom, strength, and prosperity.

Meticulously designed to the highest level of artistic excellence, this AMERICAN MINT EXCLUSIVE coin is specially minted in high relief, giving the coin's exquisitely engraved elements the sharpest detailand most incredible depth. Minted to the highest quality "Proof" standard and layered in brilliant 24k gold, it features the American flag and President Trump's promise to "Make America Great Again"on the obverse. A magnificent commemorative of this important time in our nation's history.