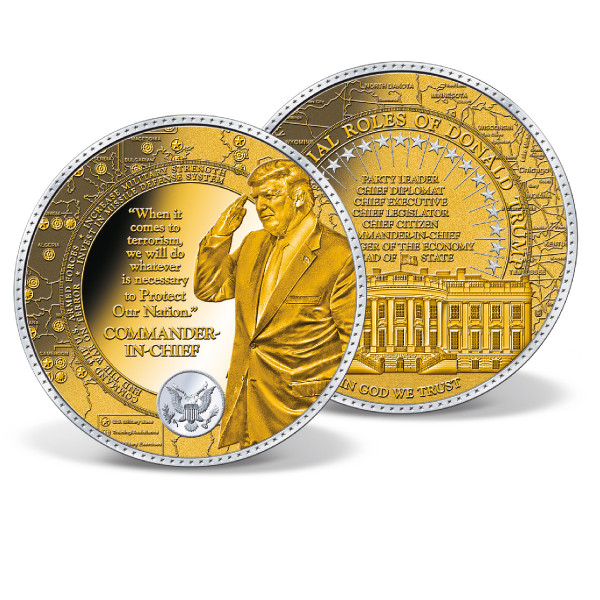 Includes a free preview of future issues in the collection Presidential Roles of D. Trump. For more information, please refer to the Satisfaction Guarantee tab below. If you do not wish to preview future issues in the collection, you may purchase the single item using the 'Individual Item Only' tab at right.
Price $139.95 * $19.95
Total: $19.95
You save $120.00
Total: $139.95
Tweet
Share
Description Satisfaction Guarantee
Description
Campaigning on a platform to "Make America Great Again," Donald Trump vowed to secure the... more
Close menu
Donald Trump Commander-in-Chief Colossal Commemorative Coin

Campaigning on a platform to "Make America Great Again," Donald Trump vowed to secure the nation's borders, return jobs to rural America, and support the country's forgotten working class. President Trump is truly a man of his word and every day he works to fulfill his promises to the American people.

Since taking office, Trump has introduced groundbreaking legislation that bolstersAmerican businesses and offers generous tax cuts for the middle class. By dismantling the broken systems of the Washington establishment and implementing an "America First" policy, Trump is making sure that the United States returns to its position as the most respected nation in the world.

In becoming President of the United States, Donald Trump took on several important roles: Chief Diplomat, Head of State, Chief Legislator, Commanderin- Chief, Chief Executive, Party Leader, and Manager of the Economy. The one thing all of these roles have in common - and the President's most important responsibility - is assuringthe security and well-being of the American people. As Commander-in-Chief, Trump represents the head of all U.S. Armed Forces, making the tough decisions on where andwhen to deploy America's military might to defend freedom around the world.

Donald Trump Commander-in-Chief Commemorative Coin for Sale Available exclusively from American Mint, this exquisite coin is luxuriously layered in 24k gold and features a highly detailed image of President Donald Trump. You'll surely marvel at the quality of the craftsmanship and the close attention to detail that characterizes all of our commemorative coins and collectibles.

Minted to the highest quality "Proof" standard, this is a treasured keepsake of a pivotal time in our nation's history and comes with a Certificate of Authenticity that certifies the size and materials of this remarakble commemorative.

Order Your Donald Trump Commander-in-Chief Commemorative Coin Today! We're offering this one-of-a-kind Commander-in-Chief commemorative coin for sale at a deeply discounted online price. You'll also get free shipping and handling if your order totalsat least $150, as well as the opportunity to pay in interest-free installments if you spend more than $100. Place your order today!