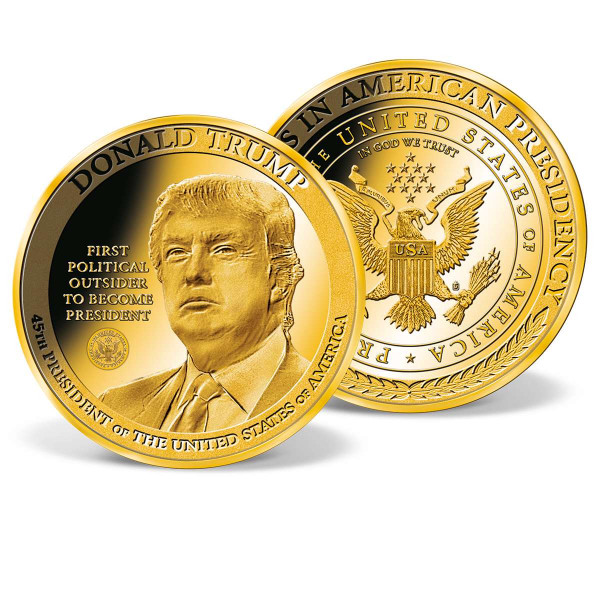 Includes a free preview of future issues in the collection Firsts in Americ. Presidency. For more information, please refer to the Satisfaction Guarantee tab below. If you do not wish to preview future issues in the collection, you may purchase the single item using the 'Individual Item Only' tab at right.
Price $129.95 * $19.95
Total: $19.95
You save $110.00
Total: $129.95
Tweet
Share
Description Satisfaction Guarantee
Description
Donald J. Trump was born in Queens, New York, in 1946. The son of a successful real estate... more
Close menu
Donald Trump Colossal Commemorative Coin

Donald J. Trump was born in Queens, New York, in 1946. The son of a successful real estate magnate, Trump used his innate business sense and leadership skills to become one of America's best-knownbusiness and television personalities with interests that include real estate, gaming, sports and entertainment. He is a charismatic leader with the ability to envision the future and support his employees while instilling confidence in them.

When Trump announced his candidacy for U.S. President, most experts considered him a long shot to win because he was a political outsider. But he was able to energize the masses with his fire-brand style and take-noprisoners approach, proving that this election was not politics as usual. >Riding a wave of revolution that had swept through the American electorate, Donald Trump won the election in historic fashion.

President Trump officially began his mission to "Make America Great Again" on January 20, 2017, when he was sworn in asthe 45th President of the United States. Since taking office, he has shaken off the naysayers and taken the bold steps needed to improve the economy, secure our borders, and bring jobs back to America.

American Mint proudly presents a massive, 24k gold-layered coin specially minted to celebrate President Trump's first year in office. This AMERICAN MINT EXCLUSIVE coin is a colossal 2.75"in diameter and is a magnificent example of the finest in coin design and minting. Utilizing the newest advances in the fine art of coining, this piece is minted to the highest quality "Proof" standard. To commemorate his becoming the first political outsider to become President, the coin features a highly detailed portrait of Donald Trump on the obverse and the Presidential seal on the reverse. Strictly limited to only 9,999 complete collections worldwide, our newest coin is a masterpiece to be treasured for generations.