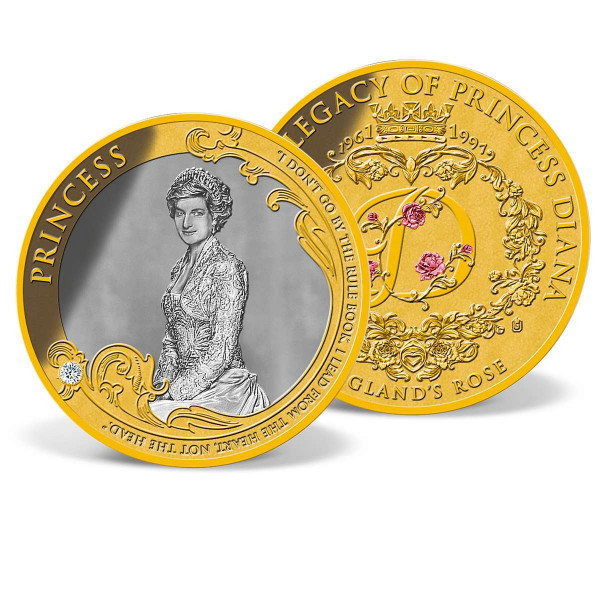 Total: $89.95
Tweet
Share
Description
Description
She was the daughter of an Earl, considered by some to be a commoner, but Diana Spencer was far... more
Close menu
Diana - Princess Commemorative Coin

She was the daughter of an Earl, considered by some to be a commoner, but Diana Spencer was far from common. In 1981, the world watched in total fascination as this beautiful kindergarten teacher married Prince Charles, heir to the British Throne, to become Diana, Princess of Wales. Together, they had 2 sons, William and Harry. Naturally shy, Diana overcame many obstacles - including her very public divorce in 1996 - and did so with a charm and grace that captured the hearts of everyone. Diana worked tirelessly throughout her life for many worthy causes including her work to eliminate landmines in third world countries and her work on behalf of AIDS patients. However, her greatest passion was children and much of her humanitarian work focused on making the world a better place for the next generation. In 1997, the entire world mourned as Lady Diana died in a tragic accident. Beautiful, elegant, charismatic, and compassionate, she will always be remembered as the People's Princess, beloved by all.

Available exclusively from American Mint, this exquisite coin features an expertly engraved portrait of Princess Diana, layered in .999 pure silver and framed in 24k gold. Theintricate framework is hand-set with a sparkling SWAROVSKI® ELEMENT. The reverse of the coin is accented by a vine of roses fully colored in rich pinks. This stunning coin is minted to the highest quality "Proof" standard.