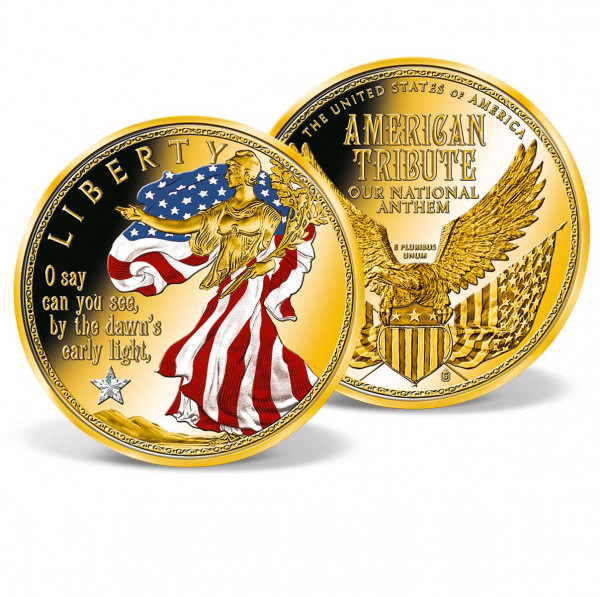 Includes a free preview of future issues in the collection Our National Anthem Crystal. For more information, please refer to the Satisfaction Guarantee tab below. If you do not wish to preview future issues in the collection, you may purchase the single item using the 'Individual Item Only' tab at right.
Price $89.95 * $9.95
Total: $9.95
You save $80.00
Total: $89.95
Tweet
Share
Description Satisfaction Guarantee
Description
During the War of 1812, our country was once again at war with the British. In 1814, the British... more
Close menu
Dawn´s Early Light Commemorative Coin

During the War of 1812, our country was once again at war with the British. In 1814, the British had won a major victory in the heart of our nation's capital when they marched into Washington, D.C.and burned down the Capitol building and the White House. The British then set their sights on Baltimore, which at the time was the third largest city in America. Baltimore was protected by Fort McHenry and if the British were going to take the city, they would have to destroy the fort first. George Armistead, commander of Fort McHenry, received word that the British were coming, so in brave defiance of the English invaders, he ordered a specially made American flag to be raised above the fort. Measuring 30' x 42', this massive flag - with its broad stripes and bright stars - could be seen from several miles away.

On September 13, 1814, a fleet of British warships made their way up the Chesapeake Bay and positioned themselves 2 miles from the fort. From this vantage, their larger guns could reach the ramparts while remaining safely beyond the range of the smaller American guns. The British began a bombardment that continued all day and all through the night. Aboard one of the British ships was an American lawyer by the name of Francis Scott Key, who had been negotiating the release of an American doctor that was captured by the British. The Americans were freed but werenot allowed to go back to shore until after the battle, so they witnessed the bombardment from a British-controlled ship anchored in the harbor. As the constant pounding continued all through the night, the dark sky was lit up with each explosion and in the rocket's red glare, Key and his companions would try to catch glimpses of the American flag.

It was not until the early light of the dawn that Key saw the American flag - not the British Union Jack - was flying over the fort, announcing an American victory. Moved by patriotic pride, Key penned a poem describing what he had witnessed while on board the ship. The poem was printed in the Baltimore Patriot newspaper under the name "The Defence of Fort M'Henry." Eventually it was set to music and people began referring to the songas "The Star-Spangled Banner." It was finally adopted as the American National Anthem on March 3, 1931.

Today, the Star-Spangled Banner is more than our National Anthem, it is a stirring reminder of the sacrifices made - past and present - to keep America "the land of the free and the home of the brave."