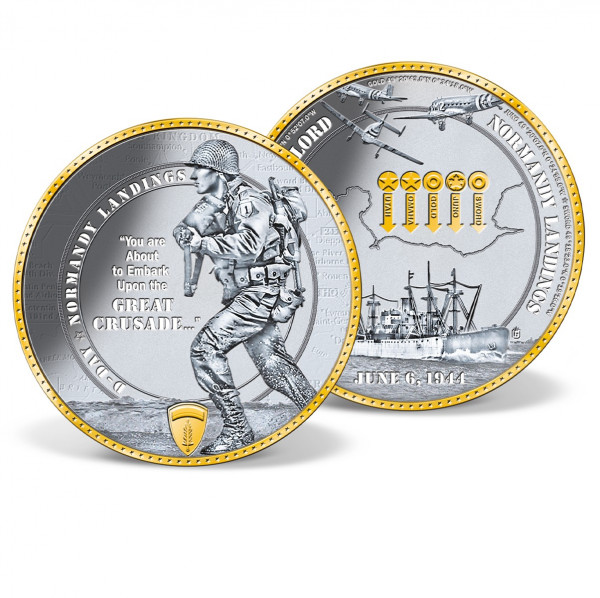 Includes a free preview of future issues in the collection Operation Overlord Colossal. For more information, please refer to the Satisfaction Guarantee tab below. If you do not wish to preview future issues in the collection, you may purchase the single item using the 'Individual Item Only' tab at right.
Price $129.95 * $19.95
Total: $19.95
You save $110.00
Total: $129.95
Tweet
Share
Description Satisfaction Guarantee
Description
On June 6, 1944, more than 156,000 Allied troops from America, Great Britain, and Canada landed... more
Close menu
D-Day Normandy Landings Commemorative Coin

On June 6, 1944, more than 156,000 Allied troops from America, Great Britain, and Canada landed along a 50- mile stretch of heavily fortified coastline along the beaches of Normandy, France. Duringthe coordinated attack codenamed "Operation Overlord," more than 6,500 ships and 11,000 aircraft supported the D-Day invasion. It was the largest air, land, and sea operation ever undertaken.

It took years of meticulous planning and tedious training in order for the audacious plan to succeed. But it all came down to the men . . . the brave souls who leapt from the landing crafts into the cold Atlantic waves as bullets tore through the air and through the men on either side. After reaching the shores, they had to run and crawl past a maze of barriers, bodies, and enemy fire to reachthe meager protection of the cliffs. Surrounded by a rain of bullets and artillery, they finally had a chance to fight - and fight they did.

Allied forces suffered nearly 10,000 casualties with more than 4,500 dead. Yet, because of the valor and sacrifice of the men who charged into the wall of bullets, the beaches were secured. By August, all of France was liberated, and within a year,Allied forces met Russian troops in Berlin and the war in Europe was over.

Available exclusively from American Mint, this colossal coin is an incredible 2.75" in diameter and was specially minted to commemorate the 75th Anniversary of Operation Overlord - the D-Day invasion of Europe - and the Battle of Normandy. Minted to the highest quality "Proof" standard and plated in .999 pure silver, this limited-edition coin has the highly coveted reverse proof finish which features shiny, polished sculpting on a stunning matte-finish background. The edge of the coin is layered in 24k gold and both sides feature 24k gold-layered accents.