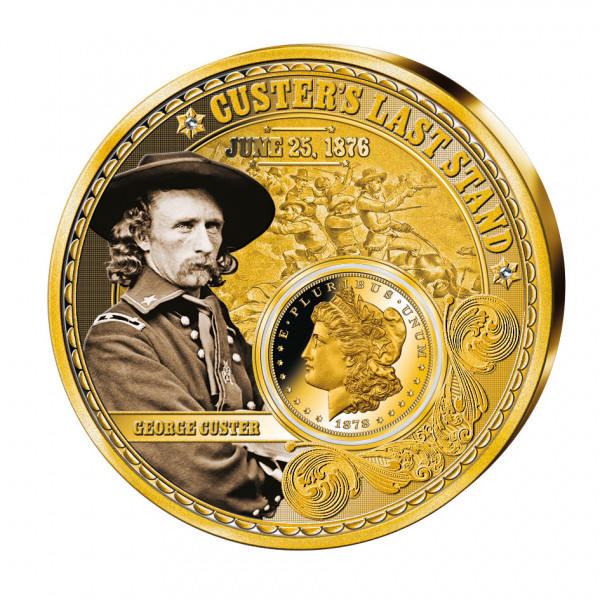 Includes a free preview of future issues in the collection Spirit of the American West. For more information, please refer to the Satisfaction Guarantee tab below. If you do not wish to preview future issues in the collection, you may purchase the single item using the 'Individual Item Only' tab at right.
Price $139.95 * $19.95
Total: $19.95
You save $120.00
Total: $139.95
Tweet
Share
Description Satisfaction Guarantee
Description
In the late 1860s, the U.S. government signed a treaty with Native Americans naming the Black... more
Close menu
Custer's Last Stand Colossal Inset Coin

In the late 1860s, the U.S. government signed a treaty with Native Americans naming the Black Hills of South Dakota as part of the Great Sioux Reservation. But when gold was discovered in the areaa few years later, the government had a sudden change of heart and quickly moved to relocate all Indians from the hills. Instead of leaving peacefully, however, Indians from all over traveled to joinSitting Bull and Crazy Horse who had set up a camp on the banks of the Little Big Horn River in Montana.

General George Custer, leading the U.S. 7th Cavalry, was tasked with dispersing the growing Indian numbers. After scouting the Little Big Horn valley, Custer planned a surprise attack instead of waiting for reinforcements. This decision placed Custer and his regiments of about 700 menat a distinct disadvantage to roughly 2,000 Sioux warriors.

The Battle of Little Big Horn--or as it came to be known, Custer's Last Stand--was the largest action of the Great Sioux War of 1876 and resulted in the Sioux easily repulsing Custer's uncoordinated and ill-advised attack, killing General Custer along with more than 260 of his men. Today the battle is remembered as an iconic defeat in early U.S. history.

American Mint: Your Reliable Partner in Collecting At American Mint, we believe that every collector should have the informationand certification needed to feel confident that they are adding a quality coin to their collection. When you order your Custer's Last Stand commemorative coin from American Mint, we'll include a Certificate of Authenticity that highlights important details such as your coin's materials and size.

We'll also provide you with a money-back guarantee. Within 20 days after you receive your coin, you are welcome to return it for any reason at all. You'll be able to request a new coin, a credit to your account, or a full refund - we'll even cover the shipping and handling. You deserve to becompletely satisfied withyour purchase, and we will do everything possible to ensure you are.

Add a Touch of U.S. History to Your Collection With the Custer's Last Stand Commemorative Coin At American Mint, our commemorative coins are reasonably priced. Any collector, regardless of their budget, will be able to add this coin, which holds a great deal of sentimental value, to their collection.

We frequently discount our authentic and replica collectibles on our site, so be sure to check back frequently.