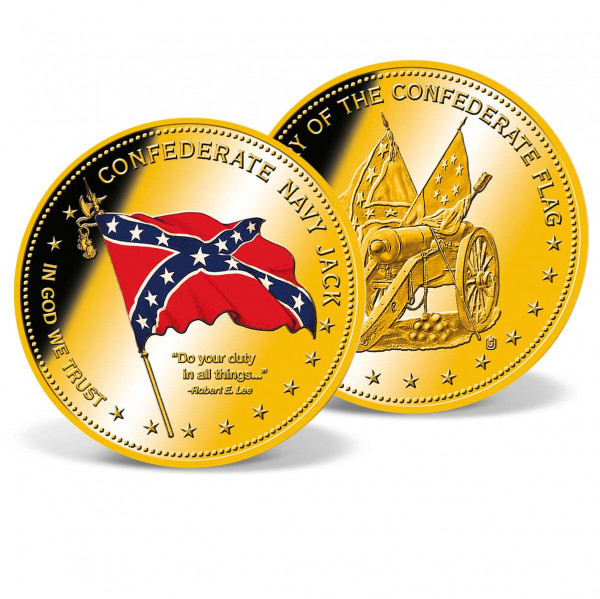 Includes a free preview of future issues in the collection History of the Confed. Flag. For more information, please refer to the Satisfaction Guarantee tab below. If you do not wish to preview future issues in the collection, you may purchase the single item using the 'Individual Item Only' tab at right.
Price $89.95 * $19.95
Total: $19.95
You save $70.00
Total: $89.95
Tweet
Share
Description Satisfaction Guarantee
Description
When the Southern states seceded from the Union during the Civil War, they needed a flag to... more
Close menu
Confederate Navy Jack Commemorative Coin

When the Southern states seceded from the Union during the Civil War, they needed a flag to symbolize the new Confederacy's sovereignty. While a few other designs were used, the one most associatedwith the Confederate States of America is the battle flag: "a red field with a broad saltire, or X, of blue edged with white and emblazoned with stars." This striking design, originally used on the battlefield, was eventually adopted across many flags across the Confederacy and today remains one of the most potent symbols of the Confederate movement.

Meticulously designed, this officialcoin is layered in 24k gold and is available exclusively from American Mint. Minted to the highest quality"Proof" standard, it features a full-color rendering of the Confederate flag and a quote about duty from General Robert E. Lee on the obverse.