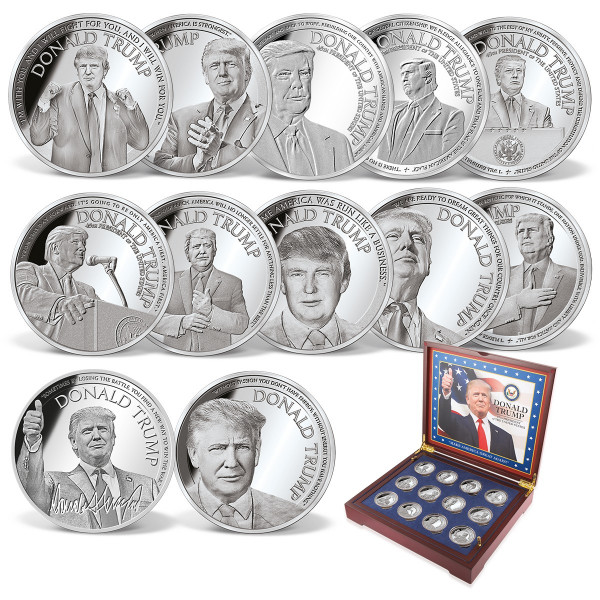 Since taking office, President Trump has introduced groundbreaking legislation and generous tax cuts for the middle class, dismantling the broken systems of the Washington establishment and once againputting the United States on top. By implementing an "America First" policy, Trump is making sure that America returns to its position as the strongest, most respected nation in the world.

Never before offered as a complete set, the Speeches of Donald Trump Coin Collection is comprised of 12 AMERICAN MINT EXCLUSIVE coins that are plated entirely in .999 pure silver. Each coin is mintedto the highest quality "Proof" standard and features a highly detailed portrait of President Trump with a quote from one of his rousing speeches. The complete set comes in a magnificent wooden collector's box that is custom-designed to hold all 12 coins and has a special-edition collector's card in the lid. These limited-edition coins are only available from American Mint and now you can get thecomplete set - including the custom-designed Executive Collector's Box

"Sometimes by losing the battle, you find a new way to win the war."

"Without passion you don't have energy, without energy you have nothing."

"Perhaps it's time America was run like a business."

"The world is most peaceful, most prosperous, when America is strongest."

"We are ready to dream great things for our country once again."

"I pledge allegiance to the flag of the United States of America. And to the republic for which it stands, one nation under God, indivisible with liberty and justice for all."

"Nothing we want for our future is beyond our reach, America will no longer settle for anything less than the best."

"We will get our people off of welfare and back to work, rebuilding our country with American hands and American labor."

"There is no globalanthem, no global currency, no certificate of global citizenship. We pledge allegiance to one flag and that flag is the American flag."