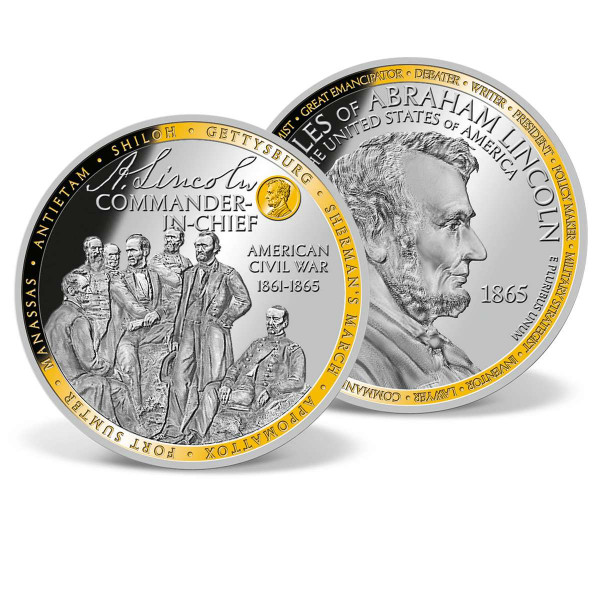 Includes a free preview of future issues in the collection The Roles of Abraham Lincoln. For more information, please refer to the Satisfaction Guarantee tab below. If you do not wish to preview future issues in the collection, you may purchase the single item using the 'Individual Item Only' tab at right.
Price $89.95 * $19.95
Total: $19.95
You save $70.00
Total: $89.95
Tweet
Share
Description Satisfaction Guarantee
Description
Running for president in 1860, Abraham Lincoln's campaign was grounded in his increasing... more
Close menu
Commander-in-Chief Commemorative Coin

Running for president in 1860, Abraham Lincoln's campaign was grounded in his increasing distaste for the spread of slavery throughout the United States. Moved by his passionate speeches, the public elected Lincoln 16th President of the United States, but before Lincoln could take office in early 1861, eleven Southern states seceded from the Union over issues of slavery and states' rights. Suddenly, the new president was faced with the greatest internal struggle our nation had ever known: the Civil War.

With brother fighting against brother, North against South, Lincoln began hispresidency in a time of fierce political and social upheaval, but vowed not to let his beloved Union be torn apart. Determined to keep America united, Lincoln also fought to end slavery and ensure that African Americans received the same inalienable freedoms that all men deserve by passing the historic Emancipation Proclamation. Although Lincoln was killed just days after the Civil War ended, hisstoic leadership and inspiring words have left an enduring mark on the American landscape.