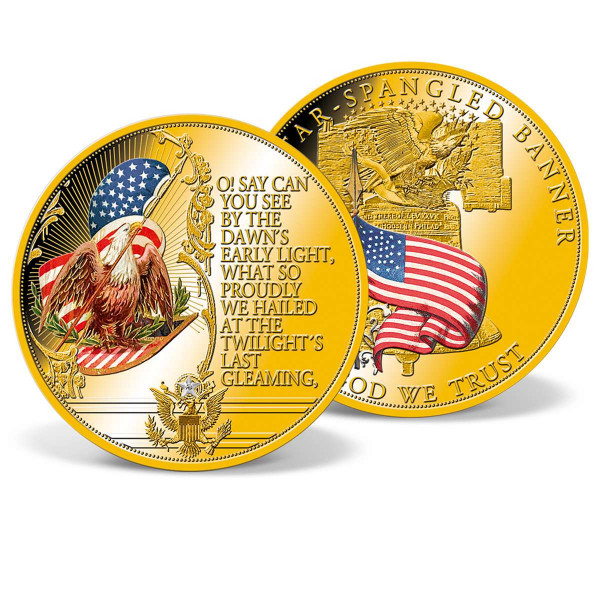 Includes a free preview of future issues in the collection The Star-Spangled Banner. For more information, please refer to the Satisfaction Guarantee tab below. If you do not wish to preview future issues in the collection, you may purchase the single item using the 'Individual Item Only' tab at right.
Price $139.95 * $19.95
Total: $19.95
You save $120.00
Total: $139.95
Save $120.00 with our Satisfaction Guarantee
Tweet
Share
Description Satisfaction Guarantee
Description
On September 13, 1814, Francis Scott Key stood aboard an American ship as the British bombarded... more
Close menu
Colossal Star-Spangled Banner Commemorative Coin

On September 13, 1814, Francis Scott Key stood aboard an American ship as the British bombarded Maryland's Fort McHenry during the War of 1812. Inspired by the sight of a lone American flag still flying over Fort McHenry at daybreak, Key wrote a stirring poem entitled "The Defense of Fort McHenry". His patriotic verse would later be set to music and be called the Star Spangled Banner. In 1931,the Star-Spangled Banner was officially named as our National Anthem.

Available exclusively from American Mint, this massive coin is an incredible 2.75" in diameter and layered in brilliant24k gold. A classic heraldic eagle is beautifully accented in full color on the obverse and a full-color American Flag is on the reverse. Minted to the highest quality "Proof" standard, the obverse also features the opening stanza of the "Star Spangled Banner" and a genuine Swarovski® crystal hand-set into a silver star above the Great Seal of the United States. Limited to only 9,999 complete collections worldwide, this breathtaking coin is a stirring piece of patriotism.