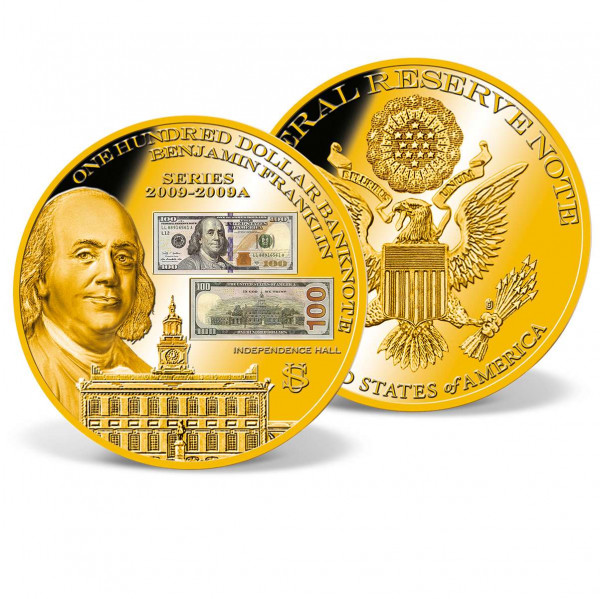 First introduced in 1862, the $100 bill originally featured a vignette of an American Eagle on the obverse. A new $100 banknote was created in 1869 with a portrait of Abraham Lincoln on the left ofthe obverse and an allegorical figure representing architecture on the right. Although technically a United States Note, the Lincoln $100 bill had the words Treasury Note printed on it. In 1914, Congress decided to honor Benjamin Franklin by putting his portrait on the $100 bill. The largest denomination banknote still in circulation, the $100 bill had its looks changed several times over the years, but continues to honor this legendary Founding Father.

The newest edition was designed in 2009 and unveiled by the U.S. Treasury on April 21, 2010. In order to stay ahead of counterfeiters, the new banknote features a noticeably larger portrait of Franklin and several colorful deterrents including a blue 3-D security ribbon with images of bells and 100s, and a color-changing bell inan inkwell. The high-tech features presented significant production problems which forced the Treasury to delay its release for more than three years. The new $100 banknotes finally made their official debut on October 8, 2013.