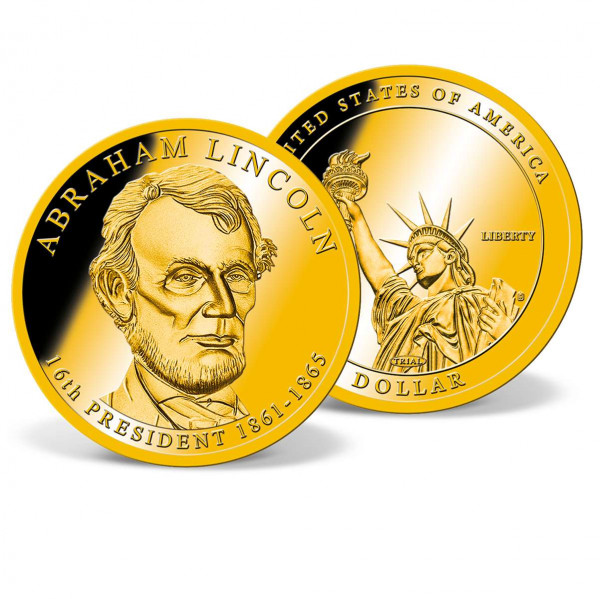 Includes a free preview of future issues in the collection Pres. Dollar Trials Colossal. For more information, please refer to the Satisfaction Guarantee tab below. If you do not wish to preview future issues in the collection, you may purchase the single item using the 'Individual Item Only' tab at right.
Price $129.95 * $19.95
Total: $19.95
You save $110.00
Total: $129.95
Tweet
Share
Description Satisfaction Guarantee
Description
In 2005, Congress commissioned the U.S. Mint to create a series of coins honoring the United... more
Close menu
Colossal Abraham Lincoln Dollar Trial
In 2005, Congress commissioned the U.S. Mint to create a series of coins honoring the United States Presidents, to be released in the order that they served. The first coin, featuring President GeorgeWashington, went on sale on February 15, 2007, and collectors were hooked. On November 18, 2010, the highly anticipated Abraham Lincoln Presidential Dollar was released to the public, sparking a frenzy among coin collectors all over the world. Although the Presidential Dollars were very popular among collectors, it was decided that, due to budgetary restraints, production of future Presidential Dollars would be limited. Since 2012, only collectors willing to pay a premium above face value have been able to purchase new Presidential Dollars for their collection. In celebration of the 150thAnniversary of Lincolnfs historic Presidency, American Mint proudly presents an exclusive masterpiece: the Colossal Abraham Lincoln Presidential Dollar Trial. It is our artistfs interpretation of the Abraham Lincoln Presidential Dollar. Minted to the highest quality gProofh standard, this exquisite tribute has been expertly layered in brilliant 24k gold! This massive coin is an impressive 2.75" in diameter . thatfs nearly 2 1.2 times the diameter of an actual Presidential Dollar!