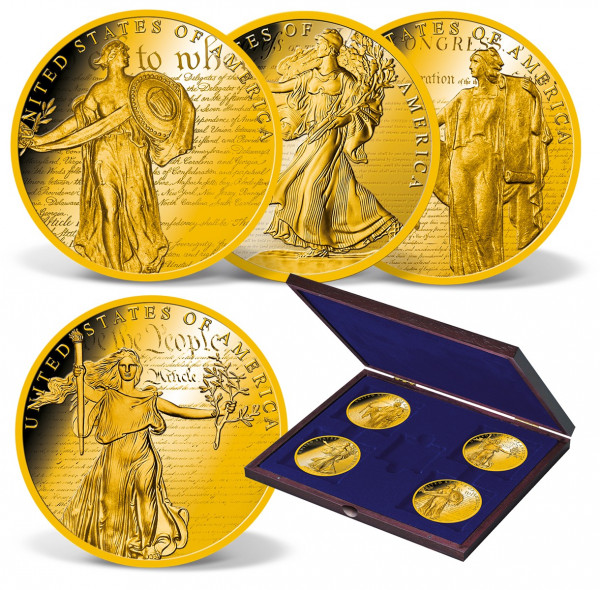 The birth of our nation began when brave American colonists cast off the shackles of British tyranny. Forging the Declaration of Independence, these colonists outlined the self-evident truths thatall men are created equal and endowed with unalienable Rights, forever breaking ties with Britain and establishing the United States as a free and autonomous nation.

No longer subjects of the crown, the newly independent states desperately needed a central government to regulate their union and organize funding for the Revolutionary War. The Continental Congress swiftly drafted the Articles of Confederation to serve as America's first constitution, and the nation was well on its way to fulfilling its dream of independence.

Once victory had been declared, however, the Articles were deemed inadequate to maintain control over the Union. In their place, the U.S. Constitution was adopted, creating three separate-but-equal branches of government with a system of checks and balances to keep things running smoothly. The Constitution's first ten amendments, collectively known as the Bill of Rights, were included to safeguard the natural rights and personal freedoms of all United States citizens.

Together, these four historic documents serve as the cornerstone of the United States of America. Commemorating America's Charters of Freedom, our expertly crafted 70mm coins are luxuriously layered in 24k gold and minted to the highest quality "Proof" standard. Each coin celebrates one groundbreaking step in America's journey to independence and features an inspiring image of Lady Liberty.