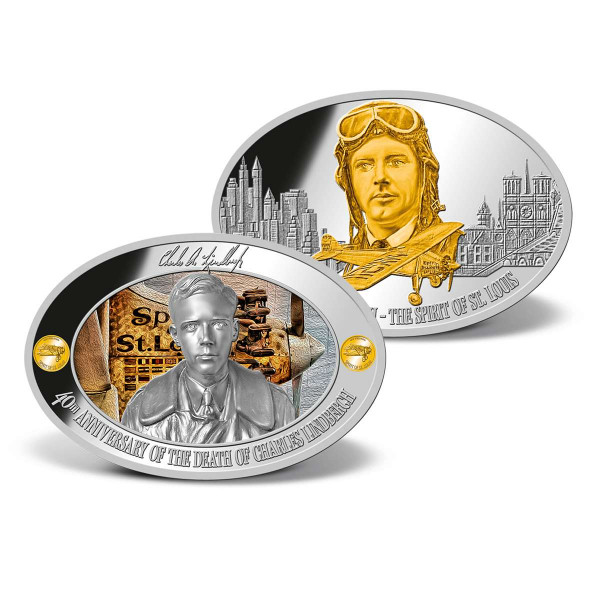 Includes a free preview of future issues in the collection Charles Lindb. Sp. of St.Louis. For more information, please refer to the Satisfaction Guarantee tab below. If you do not wish to preview future issues in the collection, you may purchase the single item using the 'Individual Item Only' tab at right.
Price $129.95 * $19.95
Total: $19.95
You save $110.00
Total: $129.95
Tweet
Share
Description Satisfaction Guarantee
Description
Charles A. Lindbergh, Jr. was born in Detroit on February 4, 1902. At an early age, he showed a... more
Close menu
Charles Lindbergh 40th Anniversary Anniversary Memorial Coin
Charles A. Lindbergh, Jr. was born in Detroit on February 4, 1902. At an early age, he showed a talent for mechanics and spent several years studying engineering before he became obsessed with the exciting new field of aviation. At the age of 20, Lindbergh left college to earn his pilot's license. After stints as a barnstormer, an Army pilot, and an airmail carrier, he decided to compete for the$25,000 prize offered up by New York City hotel owner Raymond Orteig to be awarded to the first aviator to fly solo nonstop from New York to Paris. Lindbergh persuaded nine St. Louis businessmen to finance a plane of his own design - an aircraft he named the Spirit of St. Louis. On May 20, 1927, Lindbergh took off from New York City. 33 1/2 hours and more than 3,600 miles later, he landed in Paris to the cheers of thousands who turned out to witness the historic event. Lindbergh became an immediate celebrity the world over. His historic accomplishment also brought him many awards including the Congressional Medal of Honor, the Distinguished Flying Cross, and the German Medal of Honor. His book about the famous flight won the 1954 Pulitzer Prize. Lindbergh died on Aug. 26, 1974, in his home on the Hawaiian island of Maui. His bravery and endurance earned a place in the annals of aviation history. Now you have the incredible opportunity to own a very special coin minted to commemorate Charles Lindbergh with this memorial coin. Exclusively from American Mint this uniquely shaped coin is plated in .999 pure silver. The obverse features two 24k gold-layered medallions and an exquisitely detailed portrait of Charles Lindbergh with his famous plane, the Spirit of St. Louis, printed in full-color in the background. On the coin's reverse is a stunning portrait of "Lucky Lindy andhis famous plane, standing out in brilliant gold color from the coin's highly polished, silver-plated background. Minted to the highest quality "Proof standard, this limitededition anniversary coinis a colossal 3.3" wide and 2.4" high and comes in its own protective capsule to preserve it for generations to come - a true collector's item. As with every item American Mint offers, your satisfaction is 100% guaranteed.