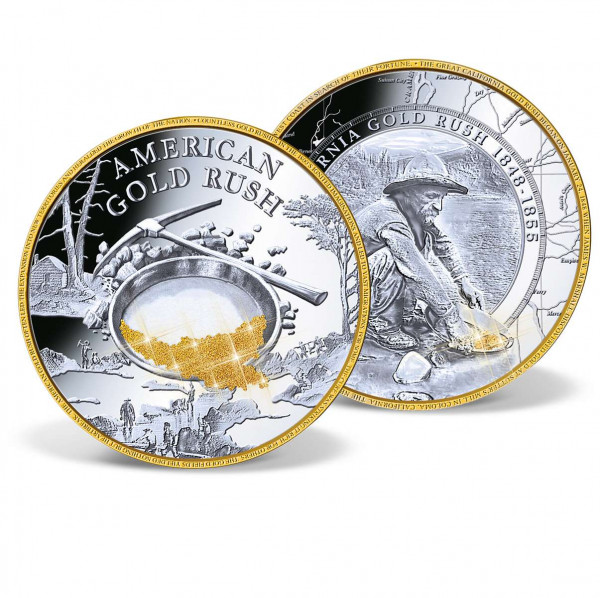 Includes a free preview of future issues in the collection American Gold Rush. For more information, please refer to the Satisfaction Guarantee tab below. If you do not wish to preview future issues in the collection, you may purchase the single item using the 'Individual Item Only' tab at right.
Price $189.95 * $19.95
Total: $19.95
You save $170.00
Total: $189.95
Tweet
Share
Description Satisfaction Guarantee
Description
On January 24, 1848, it happened - builder James Marshall struck gold. Rather, he discovered... more
Close menu
California Gold Rush Jumbo Commemorative Coin

On January 24, 1848, it happened - builder James Marshall struck gold. Rather, he discovered some gold nuggets near Sacramento, California. He was constructing John Sutter's mill when he made the discovery, and news quickly spread. Thus began the California Gold Rush, as over 300,000 people all over the world migrated to California. It was among the biggest migrations in human history, spurredby the dream of immediate riches.

Within the first half-decade of the Gold Rush, these individuals uncovered millions of ounces of the mineral. But the discovery of valuable gold wasn't theonly thing happening during this time. The area experienced unprecedented growth, causing the population of the West to explode, and California was the 31st area admitted to the Union as a state.

The silver-plated coin with 24k gold details depicts a prospector's tools on one side. Prospectors used a pan, portrayed on the obverse, to sift through deposits in search of gold. The portrayal of the pan on this colossal California Gold Rush commemorative coin features a 24k gold accent, as if the prospector has struck gold.

Surrounding the pan are tableaus of life as a prospector, and at the topof this side are the words "American Gold Rush." The border, detailed in brilliant 24k gold, includes information about gold rushes throughout the 19th century. The reverse features a similar detailwith a description of the California Gold Rush. This side also features an engraving of a detailed prospector panning for gold, again with brilliant 24k detail.