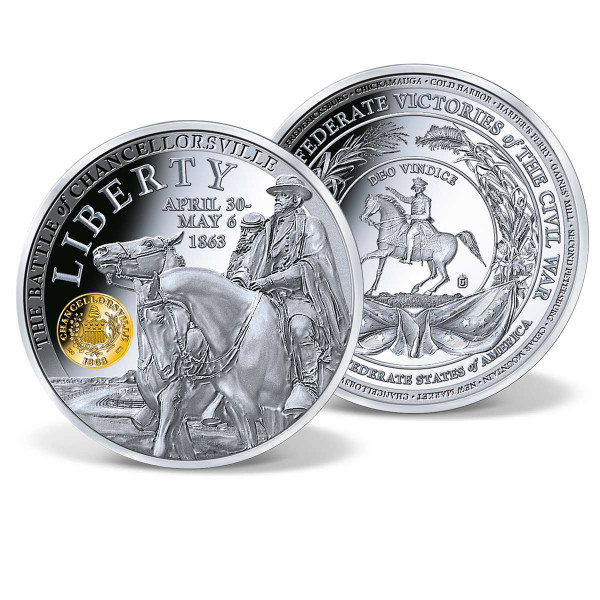 Fought from April 30-May 6, 1863, the Battle of Chancellorsville is considered to be Robert E. Lee's greatest strategic victory of the Civil War. Union Major General Joseph Hooker was leading his Army of the Potomac north of Fredericksburg when increasing Confederate resistance forced him to reroute his troops toward Chancellorsville. Realizing that Hooker's movements left a flank exposed, Leemade the incredibly risky decision to divide his much smaller army and come at the superior Union forces from multiple angles. Robert E. Lee and "Stonewall" Jackson attacked the Union's weak spots, forcing them into a defensive position. Although the Union armies counter-attacked, Confederate troops attacked relentlessly with heavy artillery and drove the Union armies to retreat after several daysof intense, bloody fighting. The decisive Confederate victory against overwhelming odds shocked Union leaders while bolstering the Rebels' morale.

Available exclusively from American Mint,this handsome coin is minted to the highest quality "Proof" standard and layered in .999 fine silver. The obverse features two Confederate soldiers on horseback and is accented by a round Confederateseal commemorating the Battle of Chancellorsville and layered in 24 gold. On the reverse you'll find the Seal of the Confederate States, surrounded by a ring bearing the names of other pivotal Confederate battles. Near the center is the motto "Deo vindice!" meaning "With God, Our Defender."