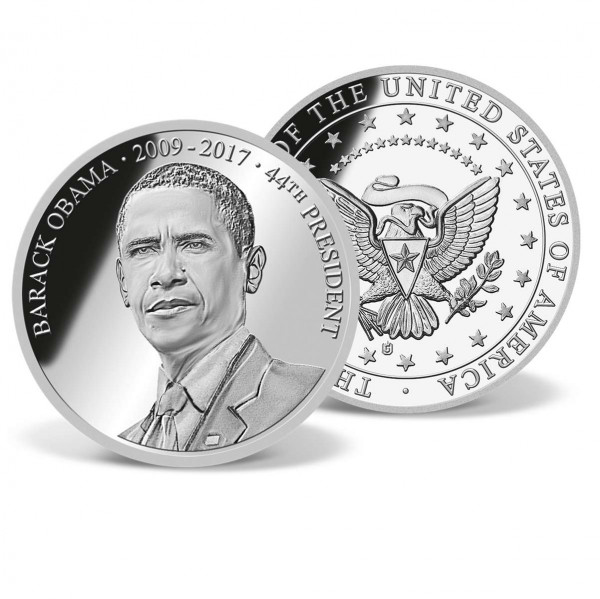 Total: $66.65
Tweet
Share
Description
Description
"Change will not come if we wait for some other person or some other time. We are the ones... more
Close menu
Barack Obama Commemorative Coin

President Barack Obama Barack Obama was born in Hawaii on August 4, 1961  he is the only U.S. president born outside the contiguous 48 states. In the Illinois State Senate, he passed a major ethics reform bill, cut taxes for working families, and expanded healthcare for children and their parents. He then embarked on a successful campaign for the U.S. Senate, where he served from 2005-2008. As a senator, Obama became a nationalfigure, prompting him to run for the White House in 2008.

After a historic race against Senator John McCain, Barack Obama was elected 44th President of the United States  and became the nation's first African American president. In 2012, President Obama was re-elected for a second term. Obama's most notable accomplishments as president include the implementation of the Affordable CareAct, which made health insurance more accessible to Americans, helping the country emerge from the Great Recession of 2008-2009, and spearheading the negotiation of the landmark Iran nuclear deal.

The Barack Obama Silver Coin Honors the Legacy of Our 44th President American Mint is proud to pay tribute to this historical American figure with our shimmering silver-plated coin. This exquisite proof-quality piece features an intricately detailed portrait of Obama during his White House years on the obverse. The reverse depicts the familiar Seal of the President of the United States, the symbol of the presidency. Our Obama silver coin comes with a Certificate of Authenticity that verifies the piece's size and materials and contains a host of intriguing facts about the item.

The Obama Silver Commemorative Coin Exemplifies Our Commitment to Quality and Craftsmanship When you purchase the President Obama silver coin or any other collectibles fromAmerican Mint, you get an expertly crafted item produced from only the best materials. We strive to create and assemble coins and complete coin collections that never fail to impress. Many of our pieces are American Mint exclusives you won't find anywhere else.

Purchase the Barack Obama Silver Commemorative Coin at a Low Price As a collector, you'll appreciate the affordability of the Obama silver coin. We're offering it for sale at an incredibly low online price. Combine it with other presidential coins and get free shipping and handling, which applies to all orders ofat least $150. If you spend more than $100, you can pay in interest-free monthly installments to make your purchase even more affordable.

Buy Your President Obama Silver Coin Today! We've only minted 9,999 complete collections of the Barack Obama silver coin, so don't wait to order yours! If you have questions or need assistance, give us a call at 1-877-807-MINT from 8 a.m.to 8 p.m. EST Monday through Friday. And be sure to browse our extensive inventory of presidential commemorative coins and other outstanding collectibles.