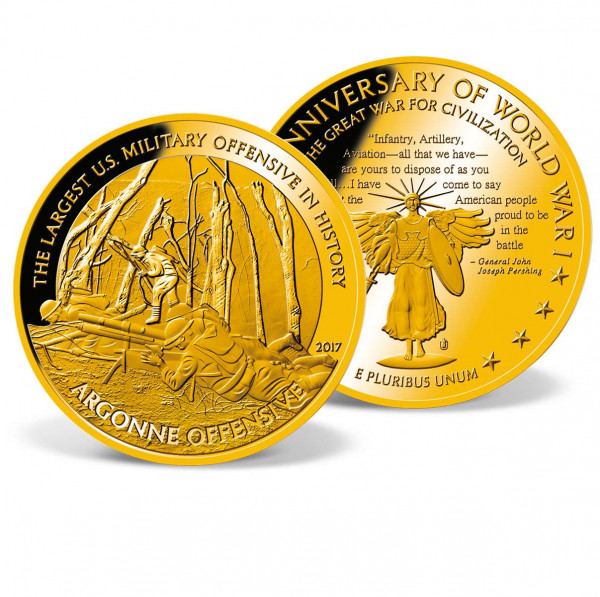 Includes a free preview of future issues in the collection 100th Annivers. of World War I. For more information, please refer to the Satisfaction Guarantee tab below. If you do not wish to preview future issues in the collection, you may purchase the single item using the 'Individual Item Only' tab at right.
Price $129.95 * $19.95
Total: $19.95
You save $110.00
Total: $129.95
Tweet
Share
Description Satisfaction Guarantee
Description
In 1914, Europe erupted in a war unlike any the world had ever known. Grueling trench warfare... more
Close menu
Argonne Offensive Colossal Commemorative Coin

In 1914, Europe erupted in a war unlike any the world had ever known. Grueling trench warfare and the introduction of modern weaponry such as machine guns, tanks, and chemical weapons led to unprecedented levels of carnage and destruction throughout the entire continent. The Great War - as it was then known - lasted for four years with the Central Powers of Germany, Austria Hungary, and the Ottoman Empire fighting the Allied Powers of Great Britain, France, Russia, Italy, Japan, and the United States. America fought its largest battle of the war along the Argonne Forest on the border of France and Belgium.

American Mint proudly presents a massive, 24k gold-layered coin specially minted to mark the 100th Anniversary of our nation's involvement in World War I. A colossal 2.75" in diameter, it is a magnificent example of the finest in coin design and minting. This AMERICAN MINT EXCLUSIVE coin commemorates the 1.2 million American soldiers who fought in the lagest battle of the entire war: the Argonne Offensive. Utilizing the newest advances in the fine art of coin production, this piece is minted to the highest quality "Proof" standard and features a highly detailed engraving of American soldiers fighting in the Forest of Argonne on the obverse. Strictly limited to only 9,999 complete collections worldwide, our coin is a masterpiece to be treasured for generations.