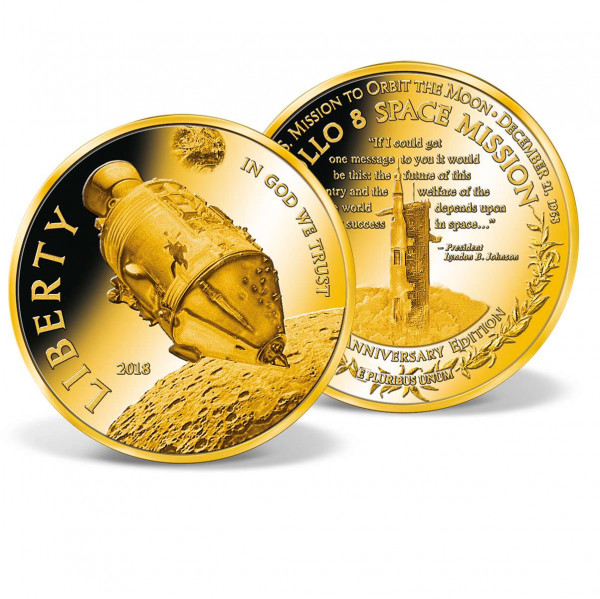 From our humble beginnings as a British colony to our subsequent rise as a global superpower, the United States of America has experienced a great many historical moments. The year 2018 marks key anniversaries for a just few of these major events, including the 50th anniversary of the Apollo 8 shuttle, which became the first manned spacecraft to leave Earth's orbit, travel around the moon, andreturn safely to Earth.

NASA launched the Apollo 8 mission on December 21, 1968. On that day, astronauts Frank Borman, William Anders, and James Lovell blasted off in a Saturn V rocket fromthe Kennedy Space Center in Florida. Three days later, on Christmas Eve, they captivated the world with a live television broadcast displaying breathtaking images of the moon's surface. After making 10 lunar orbits, the trio journeyed home, splashing down into the Pacific Ocean on December 27. Their mission set the stage for the first moon landing seven months later.

The Apollo 8 CoinCommemorates the 50th Anniversary of This Monumental Even in Our Nation's History American Mint is proud to honor the 50th anniversary of the Apollo 8 space mission by issuing this beautiful commemorative coin. Luxuriously layered in glittering 24k gold, this exquisite piece offers a highly detailed image of the Apollo 8 shuttle as it orbits the moon. The coin's reverse depicts the Apollo 8 while still on the launchpad, along with a memorable quote from President Lyndon B. Johnson regarding the importance of the space program to our nation's future.

Our Apollo 8 Commemorative Coin Exhibits Remarkable Quality We've minted the proof-quality Apollo 8 coin to meet the highest standards. You'll marvel at the craftsmanship and close attention to detail that setsAmerican Mint products apart from the rest. The piece comes with a Certificate of Authenticity that certifies its size and materials and offers a host of intriguing facts about the item. We've limited the production to only 9,999 complete collections  order yours while they last!

Get the Best Value for Your Money at American Mint Whether you're a veteran collector or justgetting started, you'll love how you can save money by buying from American Mint. We're offering the gleaming gold Apollo 8 commemorative coin for sale at a significantly discounted online price. If you're looking to expand your collection quickly, why not buy several pieces from our selection of commemorative coins and get free shipping? All orders of at least $150 are eligible! An interest-freeinstallment plan is also available if you spend more than $100.

Purchase Your Apollo 8 Space Mission Commemorative Coin Today! Obtain a piece of American history by ordering theApollo 8 coin from American Mint. If you have questions or need more information, give us a call Monday through Friday from 8 a.m. to 8 p.m. EST. And don't forget to check our entire selection of coins and collectibles!