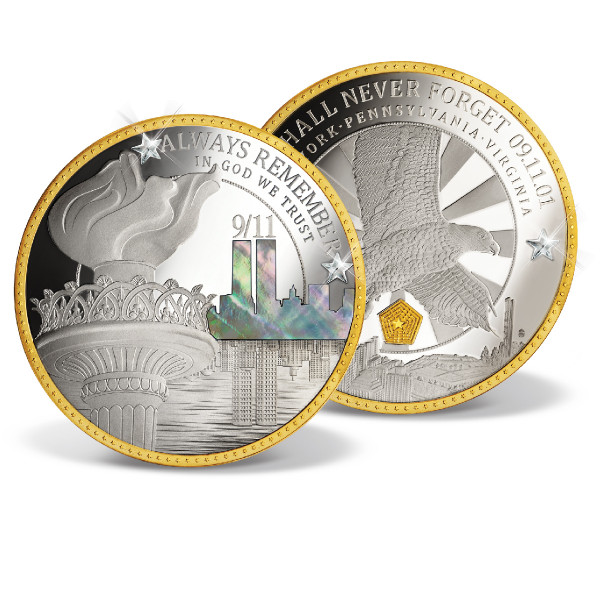 Includes a free preview of future issues in the collection We Shall Never Forget. For more information, please refer to the Satisfaction Guarantee tab below. If you do not wish to preview future issues in the collection, you may purchase the single item using the 'Individual Item Only' tab at right.
Price $139.95 * $19.95
Total: $19.95
You save $120.00
Total: $139.95
Tweet
Share
Description Satisfaction Guarantee
Description
Carefully orchestrated by foreign enemies, the attacks of September 11, 2001 were meant to... more
Close menu
Always Remember Colossal Commemorative Coin

Carefully orchestrated by foreign enemies, the attacks of September 11, 2001 were meant to weaken America's resolve and destroy the country's spirit. But rather than cower in fear, the American people did what they always do, they took action. Almost immediately, everyone from cops and firefighters to ordinary citizens became heroes as they rushed into the wreckage to pull others to safety. Inthe days that followed, America banded together to clean up and rebuild the buildings and lives that had been destroyed. We rose from the ashes, stronger than ever, to prove that America stands together as one nation, one people, united.

Today, the United States is more dedicated than ever to the cause of Freedom and Democracy. The date that was once a day of tragedy and mourning has been designated as Patriot Day, a chance to remember the lives lost and celebrate the actions of true heroes with a day of service, unity, and peace.

Minted to the highest quality "Proof" standard, this remarkable commemorative coin is is our humble tribute to the indomitable spirit and strength of the American people. We will never forget.