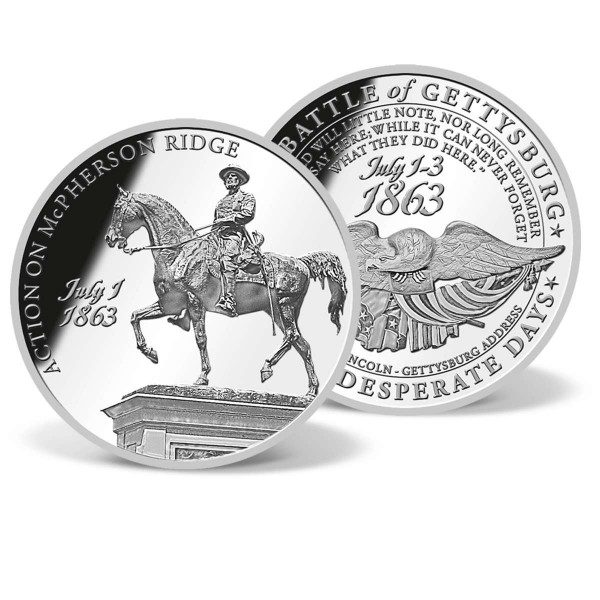 Includes a free preview of future issues in the collection Gettysburg - 3 Desperate Days+. For more information, please refer to the Satisfaction Guarantee tab below. If you do not wish to preview future issues in the collection, you may purchase the single item using the 'Individual Item Only' tab at right.
Price $79.95 * $9.95
Total: $9.95
You save $70.00
Total: $79.95
Save $70.00 with our Satisfaction Guarantee
Tweet
Share
Description Satisfaction Guarantee
Description
The Battle of Gettysburg began in the early morning of July 1, 1863, as Confederate General... more
Close menu
Action on McPherson Ridge Commemorative Coin

The Battle of Gettysburg began in the early morning of July 1, 1863, as Confederate General Henry Heth confronted Union cavalry under the command of General John Buford on McPherson Ridge just westof the small Pennsylvania town. The Confederates succeeded in pushing the line east just as Union reinforcements under General John Reynolds arrived.

At 8 AM, Confederate forces under Archer and Davis approach Gettysburg from the Northwest and encounter Union troops led by Buford along McPherson Ridge. Buford's men hold back the rebel army for nearly an hour, but are forced to retreat;however, Union reinforcements soon arrive. Archer's forces engage the new Union troops and manage to break Cutler's right flank, but are surrounded and captured by the 6th Wisconsin Regiment.

The fierce fighting that ensued on McPherson Ridge set the stage for the largest, bloodiest and most decisive battle of the entire war.

Meticulously designed by American Mint - in conjunction with The National Civil War Museum - to commemorate the Sesquicentennial of the Civil War, this exquisite coin pays tribute to those who fought during the three-day Battle of Gettysburg.