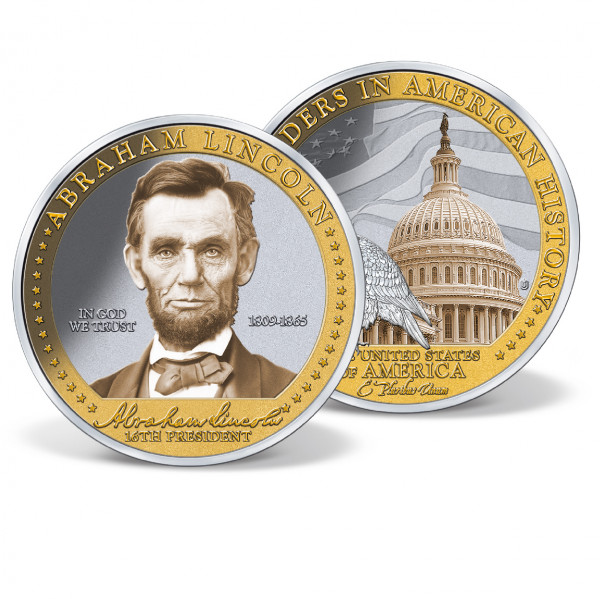 Includes a free preview of future issues in the collection Great Leaders in Ame.History. For more information, please refer to the Satisfaction Guarantee tab below. If you do not wish to preview future issues in the collection, you may purchase the single item using the 'Individual Item Only' tab at right.
Price $89.95 * $19.95
Total: $19.95
You save $70.00
Total: $89.95
Tweet
Share
Description Satisfaction Guarantee
Description
Abraham Lincoln was the 16th President of the United States and elected to office in November of... more
Close menu
Abraham Lincoln - Great Leader Commemorative Coin

The Abraham Lincoln Commemorative Coin by American Mint The Abraham Lincoln Commemorative Coin is a limited-run collector's item, and only 9,999 will ever be produced. This American Mint exclusive masterpiece is handsomely layered in .999 pure silver and features 24k gold accents and color padprint. Our unique Abraham Lincoln coin features a highly detailed portrait of President Lincoln on the obverse and is minted to the highest quality "Proof" standard.It is a fitting tribute to Lincoln's historic Presidency and his status as one of our nation's greatest wartime Commanders in Chief of all time.

Get Your Limited Edition Abraham Lincoln Commemorative Coin The Abraham Lincoln Commemorative coin is part ofour Great Leaders in American History Coin Collection. To order yours, or to inspire a loved one with a gift featuring one of our nation's most beloved presidential figures, add your desired quantityto your shopping cart and place your order.