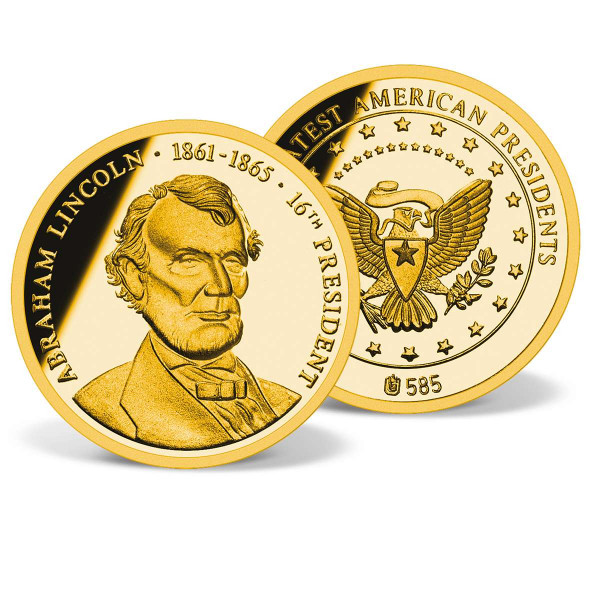 Includes a free preview of future issues in the collection The greatest U.S.Presidents. For more information, please refer to the Satisfaction Guarantee tab below. If you do not wish to preview future issues in the collection, you may purchase the single item using the 'Individual Item Only' tab at right.
Price $129.95 * $29.95
Total: $29.95
You save $100.00
Total: $129.95
Tweet
Share
Description Satisfaction Guarantee
Description
Born in a log cabin in Kentucky in 1809, Abraham Lincoln worked as a storekeeper, rail-splitter,... more
Close menu
Abraham Lincoln Commemorative Gold Coin

Born in a log cabin in Kentucky in 1809, Abraham Lincoln worked as a storekeeper, rail-splitter, postmaster, surveyor, and lawyer before becoming the sixteenth president of the United States. His election in 1860 was quickly followed by the secession of several southern states and the start of the Civil War. In his second inaugural address, he spoke of the war's end. On April 14, 1865, five days after the war ended, Abraham Lincoln was shot by John Wilkes Booth, but his legacy is forever cemented in American history.

Meticulously designed, this solid gold commemorative coin honorsAmerica's 16th President on the 150th Anniversary of his historic election and features a highly detailed engraving of Abraham Lincoln on the obverse. Minted to the highest quality "Proof standard,this coin is struck in solid 14k gold and strictly limited to only 9,999 complete collections worldwide. This remarkable tribute comes in its own protective capsule to preserve it for generations tocome - a true collector's item.